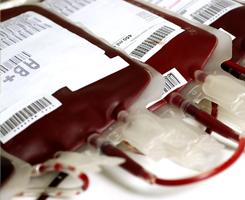 A unit of blood does so much for patients in need. The gift of life is donated, tested, processed and sent to hospitals' transfusion service departments where more important work is done to ensure it is compatible with the recipient.

By Bonnie Westman with the Los Gatos Patch.

Since 2006, Linda Swenberg and Michelle Abene donate platelets at Stanford Blood Center, in addition to significant volunteer work in the community.

John Paul Mayor is one of our very regular platelet donors. For our #WhyIGiveBlood campaign, we picked his brain about what inspired him to become a regular donor.

The Safe Blood Africa Project: How SBC Donors Can Help

Think globally, act locallyhelp globally? At Stanford Blood Center, each of these are possible because now your blood donation that will save a life in your community can also help save lives overseas. Our online store recently added an option of donating the points you receive for giving blood towards helping blood centers in Nigeria, as part of the Safe Blood Africa Project.