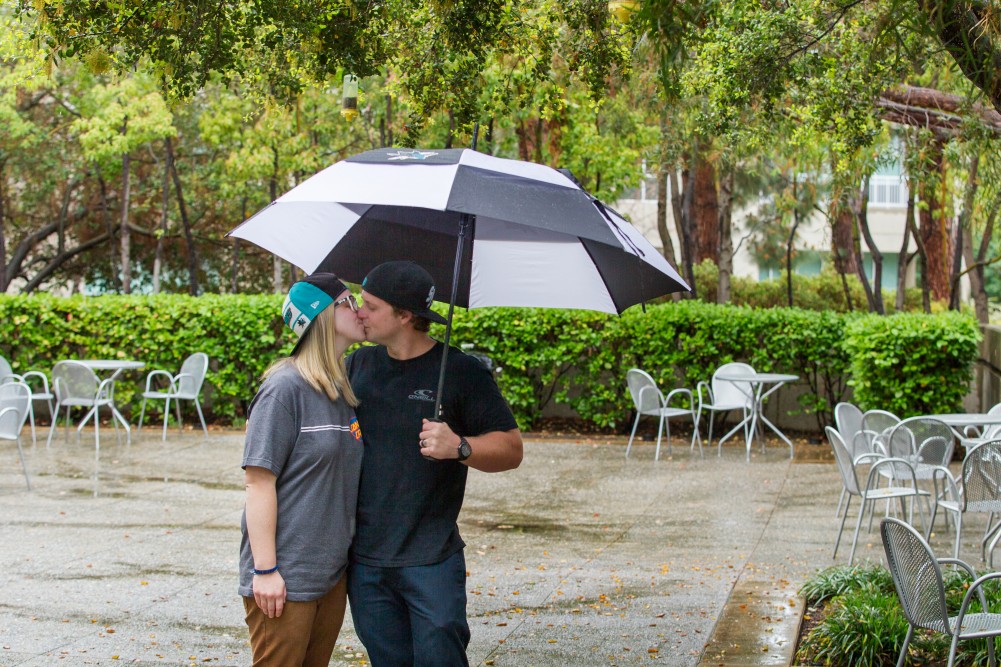 Kendralyn and Cole Morley knew from an early age that they wanted to spend their lives together. Now, 24 years old, Kendralyn and Cole have been friends since they were seven. Both grew up with a passion for hockey and played on the same coed team for several years. Theirs is a great love story, sprinkled with difficult challenges and pain, but with a happy ending.

When Cole was ten, he started experiencing constant pain in his leg. His parents took him to see his pediatrician, whose initial diagnosis was that the pain was due to a sore muscle from playing sports. Cole and his parents took the doctor’s advice: ice the area and take ibuprofen for a few weeks. But when the pain worsened to the point where Cole had a hard time walking, they returned to the pediatrician.

The pediatrician conducted a series of tests before referring Cole to Stanford Health Care (SHC) for additional testing. The doctor at SHC determined that he had Ewing Sarcoma, a rare bone cancer affecting less than 1,000 children each year, which caused the growth of an eight-pound tumor the size of a football on his pelvis.

The doctor recommended an aggressive treatment plan that included chemotherapy, radiation and a surgery that would likely result in Cole not being able to walk again. At the advice of their doctor at SHC, the family sought a second opinion before proceeding with the treatment plan. That second opinion came from the University of California San Francisco, where a doctor told Cole he could treat the tumor with radiation to ease the pain, but death was inevitable. He anticipated Cole only had six months to live, a fate Cole was not willing accept — he was determined to become a professional hockey player — so they returned to SHC.

Preparing for the Worst

Preparing to never being able to walk again, but knowing he would survive, Cole started treatment at SHC, 14 rounds of chemotherapy and 30 days of radiation, during which he received significant amounts of blood products to keep him alive. The final step was surgery to remove the tumor, and with it half of his pelvis. Despite the experience of the surgeon that was to perform the surgery — he had operated in more than 30 similar cases — the SHC medical team didn’t believe Cole would walk again. In fact, only two or three that had undergone a similar surgery walked again.

The family considered a prosthetic pelvis but because Cole was so young and was still growing he would need to have it replaced every six months. They decided against it. Instead, after an initial recovery period, Cole went to physical therapy one to two times a week for at least two years. His hard work and dedication paid off. Not only was Cole able to walk again, he was able to continue playing hockey. “I took one day at a time. A positive attitude is the reason I am doing so well now,” Cole said.

Kendralyn remembers the situation clearly. When Cole became ill, his parents went to see the hockey team and explained Cole’s situation. Ever the optimist, Kendralyn remembers thinking, “he was the cutest thing in the world and I was absolutely in love with him.” She told her mother, “he’s going to make it through, and he’s not going to die because we haven’t gotten married yet.”

Kendralyn and Cole continued to be friends over the next few years — Cole was recovering well and back on the hockey team — when one fateful afternoon Kendralyn, 13 at the time, was out riding her dirt bike and was in a terrible accident. She was riding down a bumpy hill when her front tire hit a rut throwing her over the handlebars; her feet caught on the handlebars and whipped her towards the ground.

Despite having a full-face helmet on that day, Kendralyn suffered severe injuries. Her chin hit the ground with such an impact that it completely cracked open the helmet breaking both mandibules and splitting her chin. Additionally, her 300-pound bike landed on top of her, pinning her to the ground. “I remember every part of it like it was slow motion. It isn’t difficult to talk about that day but I still feel a lot of physical pain.” Kendralyn said.

When emergency staff arrived, they anticipated a lot of internal bleeding and made the decision to send Kendralyn to SHC to receive the best care possible. She lost so much blood that day — over ten units — that she almost died. Fortunately, the blood products she needed were available, thanks to the generosity of donors.

Surgeons replaced the shattered bones in Kendralyn’s face with metal plates and she spent the next three months in the hospital with her mouth wired shut. She was unable to eat solid food for six months so she lost a lot of weight. Once the wires were cut, she had to learn how to reuse the muscles in her jaw so she could eat and talk again. She has since had two more surgeries and may require more.

The silver lining is that a few months after the accident, Kendralyn, then 13, and Cole, then 14, started dating. They were once again on the same hockey team and the connection couldn’t be denied. “I knew pretty soon that I wanted to marry her. I couldn’t resist a girl who played hockey and she was the coolest of them all,” Cole said. The rest is history.

Where Are They Now

Kendralyn and Cole both recognize how lucky they are. “We talk about how we are inspired to live life to the fullest. We both came so close to not being alive anymore,” Kendralyn said.

Wise beyond their years, they try to not take anything for granted — especially each other — and they also make it a priority to help others. They are both frequent blood donors and donate double-red cells as often as they can. Additionally, they are both in school studying to become elementary school teachers. They spent a couple of summers volunteering at a home for mentally challenged adults, and would someday like to open a camp to help at-risk, underprivileged youth.

Stanford Blood Center (SBC) is honored to have such inspiring and dedicated donors like the Morleys, who first gave blood when SBC hosted a mobile at their school. “We want to give blood to give back, we can save peoples lives,” said Cole. Kendralyn admits, “I don’t like needles but there is something about giving blood – it doesn’t hurt – and I know it’s going to help someone. We donate with Stanford because of our personal connection and because it fulfills an immediate need in our community.”

If you are inspired by the Morleys’ story and would like to donate blood for patients like them, please call 888-723-7831 make an appointment or visit sbcdonor.org.

At Stanford Blood Center, we lead the fields of transfusion and transplantation medicine by advancing science and technology. We provide hope for the future by teaching the medical leaders of tomorrow. We enhance lives by connecting donors to patients every day.