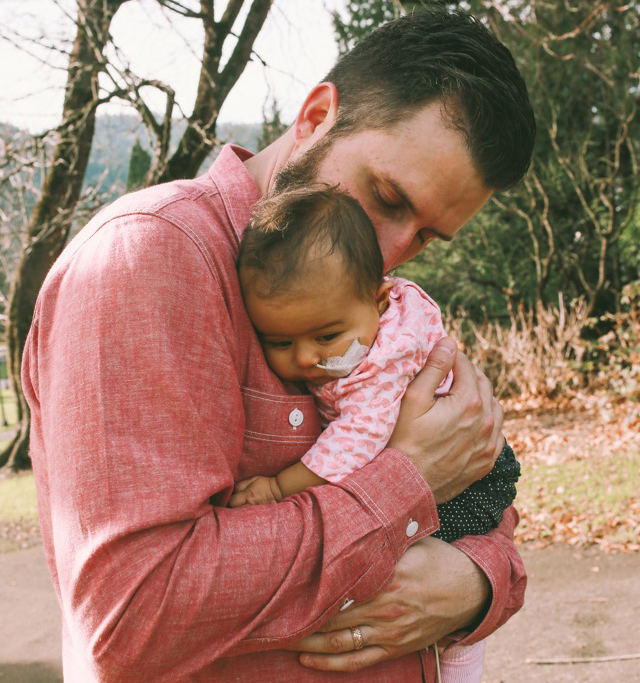 A New Liver, a New Lease on Life for Little Alma

On June 10, 2014, after a long and complicated labor, baby Alma’s journey began. Her entrance into the world was not an easy one. Nearing the end of mother Amy’s pregnancy, doctors expressed concerns that the baby had stopped growing and determined that labor should be induced. A Pitocin IV drip was started but Alma still did not want to join the outside world. Doctors elected to help her out with the use of a vacuum suction, which left a cephalhematoma on her head, causing jaundice. But although the labor and delivery were challenging, Alma was a seemingly healthy 7 lb. 5 oz. baby girl with a strong cry.

Unfortunately, more challenges were to come. At Alma’s two-month appointment with her pediatrician, it was clear something was wrong. Alma was diagnosed with biliary atresia, a progressive and chronic liver problem where the bile ducts in the liver are blocked. This blockage causes the bile to remain in the liver, causing serious damage to the organ. According to Lucile Packard Children’s Hospital Stanford’s (LPCH) website, this life threatening disease occurs once in every 18,000 births.

Doctors knew they had to work quickly to give Alma the best chance at survival so they opted to conduct an immediate Kasai portoenterostomy, an operation that connects the bile drainage from the liver to the intestinal track, essentially replacing the damaged bile ducts with a portion of the small intestine (National Institute of Health). But the procedure was not successful and in October 2014, when Alma’s health started to decline, she was rushed to LPCHS, one of the few centers on the West Coast that conduct pediatric transplants. Doctors managed to stabilize her and she was immediately put on the liver transplant list.

All the family could do was wait for the call that a liver was available for Alma. It was “an emotional rollercoaster,” Amy said. Amy and Jereme, Alma’s father, worried about the health of their daughter constantly. Soon caring for her became a full-time job for both of them, along with caring for their two-year-old son. Finally, in late February 2015, the call came that a liver was available at LPCHS.

Alma and her mother were flight lifted to Stanford and within 18 hours of arriving, Alma had her new liver. During surgery, she had to receive a full blood transfusion and because she had an ABO mismatch liver—Alma is type O and her liver was type AB—this complicated the surgery since any plasma-containing products Alma received had to be AB, and red blood cells had to be O. But the surgery went smoothly, thanks to the dedicated staff and doctors.

Looking towards the future

Alma’s recovery is going extremely well, even exceeding the surgery team’s expectations. The family is now back in Portland, Oregon and look forward to watching their daughter grow up happy and healthy. The family keeps an online journal about Alma’s journey and writes:

“Every day we take steps toward our new normal. Eventually, hopefully, Alma will be down to a few medications and have very low levels of immunosuppression. Basically she’ll be just-a-kid [sic], albeit one with a badge of honor across her stomach that always has to be somewhat near a respectable medical institution.”

Alma and her family feel incredibly blessed and honored. “Everyday is Christmas day when I see her smiling and growing strong, ” Amy said.

Jereme told us he had regularly scheduled blood donations at his work prior to this experience but could never have imagined that someone so close to him would have to rely so heavily on this lifesaving resource. Organ and blood donors definitely play a critical part in helping save lives every day.

To read more about Alma and her progress progress as told by her family, visit their online journal here. For more information about the liver transplant program at LPCH, please visit their website.