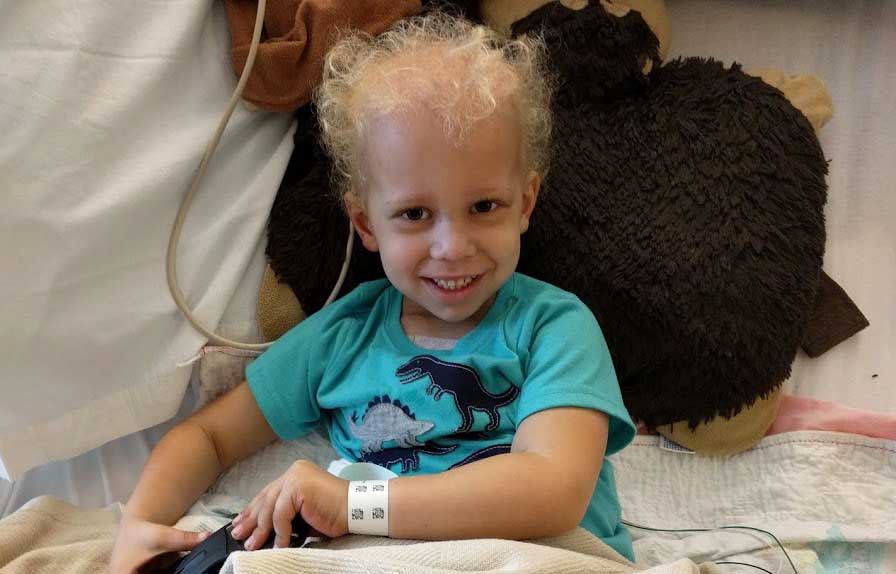 As girls growing up in Menlo Park, Betsy McBride and her sister used to accompany their father when he donated blood at Stanford Blood Center (SBC). Betsy took the habit to heart, continuing to donate for SBC when she could. But until August 26, she had no idea how much blood donors would one day mean to her personally.

On that day, Betsy and her husband Steve, parents of two precious children – strawberry-blonde Ashlyn and curly-haired Austin – received news that no parents should have to hear. Their little boy, Austin, just three years old at the time, had been in and out of the doctor’s office for a few weeks. Everyone suspected antibiotic-resistant ear and sinus infections and inflamed adenoids. On August 26, though, they noticed that their happy, chatty boy’s smile looked lopsided. He wound up in the ER getting a CT scan, and the results were devastating: Austin had a tumor pressing up against his brain. Two days later, doctors at Lucile Packard Children’s Hospital diagnosed him with Stage IV Burkitt’s Lymphoma, an aggressive, but treatable, cancer.

Throughout the months of intense, heart-wrenching treatments that followed, Austin and his family endured many ups and downs with incredible courage and grace. Along the way, many friends and family asked Betsy and Steve what they could do to help. They reassured them that they were just so grateful for their support, and could envision that play dates for big sister Ashlyn, meals, etc., might be helpful at some point, but told them that in the early days of dealing with this scary new reality, they just didn’t really know yet.

By late January, Austin had gone through chemo, two ambulance rides, and 15 stays and 92 days at Lucile Packard Children’s Hospital. (And in just a little glimpse of this incredible boy’s sparkling personality and fighting spirit, through many of these days he wore his treasured Star Wars Stormtrooper jacket.) He received 15 blood transfusions, nine platelet transfusions, and IVIG (immunoglobulin) at least once, courtesy of SBC blood donors. That stirred a profound sense of gratitude in Betsy. “I can’t quite describe what it was like to be on the receiving end of one of those bags of blood,” she wrote, following Austin’s first transfusion in a blog she created to keep family and friends updated. “I’ve donated plenty of times before (though not as frequently as I should), and occasionally wondered where it ended up. Seeing that bag hanging on Austin’s IV pole…. I wanted to know who donated the contents of that bag, find them, and thank them.”

Happily, this past January, after a very tough five months, Austin reached a very exciting milestone: he is cancer-free. While he is not completely out of the woods — there is a risk of relapse — it is more likely than not that Austin will be okay. “Of course, there are so many things that will never be the same,” Betsy wrote, and she and Steve are very different people than they were before Austin’s diagnosis. “There is much that we used to take for granted that we now savor. Our perspective on what’s important has shifted,” Betsy wrote in her blog.

Betsy said it best herself: “There is a lot happening in our country, and around the world, that is really discouraging and sad … But one of the good things that has come out of this experience with Austin is the reminder of how much good there is in the world. We are so grateful for our doctors and nurses, our friends, and the many people who’ve taken an interest in Austin’s story and shown us so much kindness and generosity, including complete strangers.”

Betsy emphasized that donating blood is one important way people have demonstrated this kindness. Now, she knows exactly what to say to people who want more than anything to help people going through an ordeal like her family has weathered: Become a regular blood donor!

For now, Betsy, Steve, Austin, and Ashlyn are enjoying some well-deserved quality family time. Austin turned four in February, and he’s started going back to preschool. When he grows up, he wants to help other people; he has been telling everyone that when he grows up, he’s going to be a police officer, a fire fighter, or an ambulance driver. And recently, the Make-a-Wish Foundation granted Austin with a well-deserved wish, which the McBrides enjoyed this summer.

And with his remission, his family is receiving its greatest, well-deserved wish as well.

If you are inspired by Austin’s story and would like to donate blood for patients like him, please call 888-723-7831 make an appointment or visit sbcdonor.org.