#WhyIGiveBlood: It Supports the V.A. Hospital

I began giving blood with the Red Cross in 1960. My boss had cancer and the whole company would go down and donate blood in his name. He survived a year or so, and after he died, I still continued to give blood. 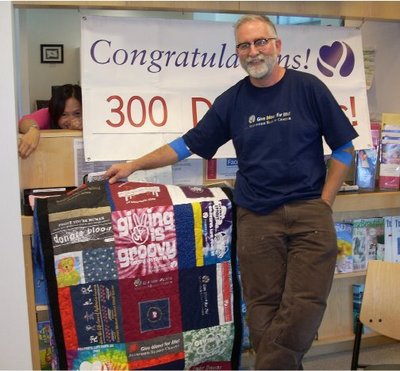 By Jim Early, 300-time blood donor
Above, Jim (with nurse, Raquel Morgia, sneaking in a smile) stands beside a quilt his wife made from his collection of SBC t-shirts.

When I was twenty-two I was sick with an intestinal disease. In a month's time I went from healthy to hospital patient and for the next seven weeks I lived in the Old Hoover Pavilion Stanford Hospital. I ate nothing by mouth and instead received all my nutrition from IVs into my arms and eventually via a central line. A year later I was back again and after another three weeks opted for corrective surgery. After some major surgery, a few revisions, and many units of blood, (during and post op) I was healthy again. While being treated I thought very little about where the blood came from or who was giving it, I just wanted to feel better. 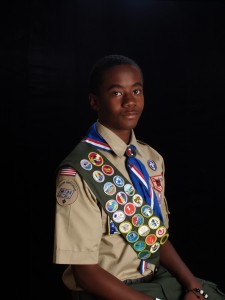 Rahman Humphries was trying to pass a 100-yard swimming test on his way to becoming an Eagle Scout. He dreamed of achieving the highest award that the Boy Scouts offer, but he was struggling to make the distance.

Twins Sophia and Charlotte Gonzalez required numerous blood transfusions as newborns and again during their recent liver transplants. The below article is by Erin Digitale, Writer for Stanford School of Medicine's Communications & Public Affairs Department.

In a small room at Lucile Packard Children's Hospital, Megan and Ricky Gonzalez each held one hand of their daughter Sophia, comforting her as she recovered from a Nov. 8 liver transplant. Near Sophia's crib, her identical twin, Charlotte, babbled happily in the girls' double stroller. Charlotte was waiting her turn  which came Nov. 27  for her own liver transplant to treat the metabolic disease that nearly killed both girls as newborns.

Friends Roy Tuason and Erik Klein gave their 100th donations together on Tuesday, 3/6 at our Mountain View center. Their wives, friends and co-workers joined them on this special day with many of them donating as well.

Here, Roy shares a little about himself and his buddy, Erik, and how they got started donating blood.

A Letter to Blood Donors

I am an active 43 year old woman with a strong love for life. I am living with terminal breast cancer and acute leukemia (AML). As a result, I am transfusion dependent and now receive blood and platelets on a weekly basis.

By Bonnie Westman with the Los Gatos Patch.

Since 2006, Linda Swenberg and Michelle Abene donate platelets at Stanford Blood Center, in addition to significant volunteer work in the community.

John Paul Mayor is one of our very regular platelet donors. For our #WhyIGiveBlood campaign, we picked his brain about what inspired him to become a regular donor.

At a blood donor recognition event last year, Janet Silberman, a 150-time donor, sat in the audience and listened to Larry Frederick, a retired police officer, thank each and every individual in the room for saving his life. Many years earlier, he experienced a life-threatening event that required immediate blood transfusions. His story could have been terribly tragic. But instead, the blood was available and it saved his life. He now rides his bicycle across the country setting up blood drives and personally thanking the donors.

#WhyIGiveBlood: Because of My Dad

Many of our donors have unique stories about why they started giving blood. Through our #WhyIGiveBlood campaign, we are taking the opportunity to highlight some of them as an inspiration for others. This first piece in the series is by Tami Turner, a long-time, dedicated SBC blood donor.

My father is the reason I'm a 300+ unit donor. I grew up in the hills above Peninsula Hospital, for which my father was an on-call whole blood donor. He had AB blood, and would be called sometimes in the middle of the night to go down and donate. When he died prematurely in 1985, it occurred to me that we were losing a whole generation of donors from WWII & Korean War eras, and that I needed to step up to the plate!