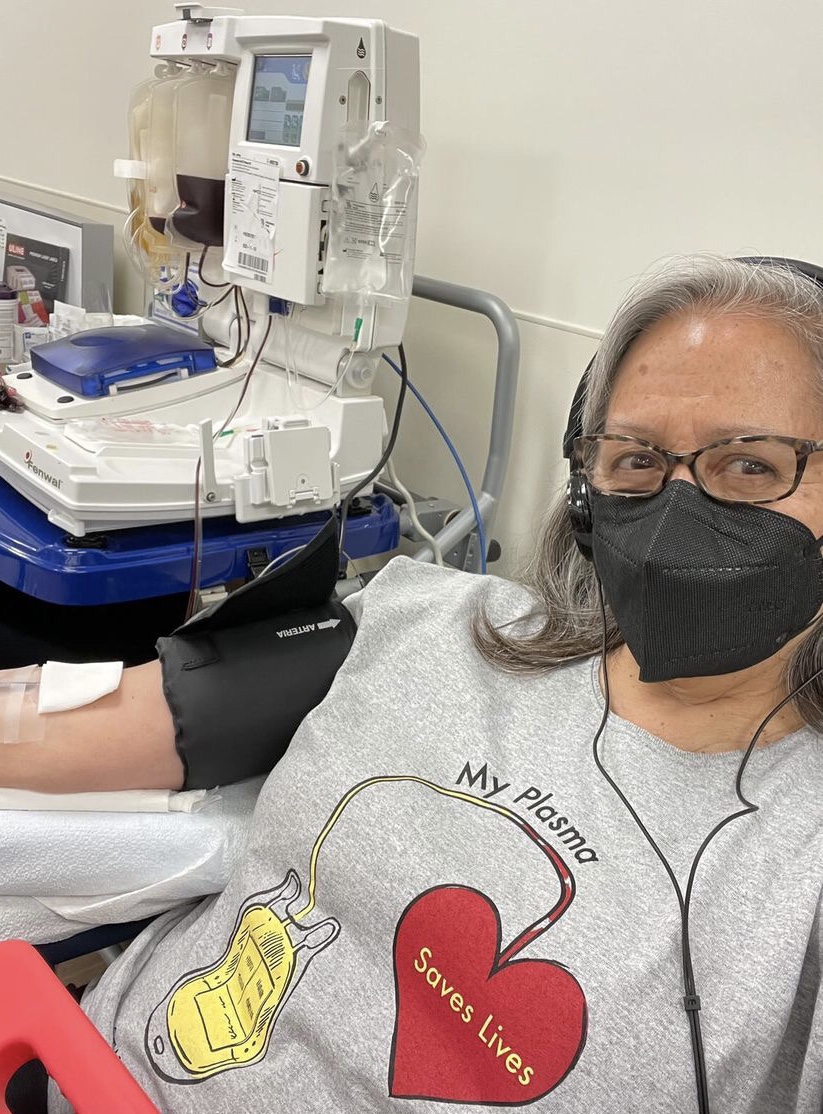 Did you know that patients across the U.S. require nearly 10,000 units of plasma every day? Plasma is the yellow liquid portion of the blood in which the red cells, white cells and platelets are suspended. It contains numerous proteins and enzymes that play many different roles in your body. One of the roles is to help induce clotting and control bleeding. Patients who may require a plasma transfusion include burn and trauma victims, active bleeders and those with liver disease.

You can donate plasma every four weeks, but there is a limit to only 12 plasma donations each year. Plasma, when frozen, can last up to one year. However, once plasma is thawed, it will only last for 5 days which is why donations are so critical.

Dolores Montano is a long-time donor with Stanford Blood Center and is closing in on her 100th Milestone donation. The San Jose resident started donating plasma last year at our South Bay center and shared her experience with Ross Coyle, SBC’s Public Relations Officer.

Why do you donate?

It just seems like the right thing to do to help people who need something that I can give. Especially knowing that it’s something that can save a life. I had a friend who was donating, so I thought I’d give it a try. Now it’s become part of my routine.

Did you ever think you’d be closing in on 100 donations?

No, not in my wildest dreams did I think I’d reach 100 donations. I was a Four Seasons donor for many years and at that rate, it didn’t seem attainable, especially when I might travel to some places that would make me ineligible for a year. The first time I asked about donating platelets I was told that I wasn’t eligible because I’d given birth. Later I mentioned that being A+ was sort of boring because there was never a call for it like there often is for O types (Lol). That’s when I found out that there’d been a change and I could be tested for eligibility to donate platelets. I did and once I started donating platelets regularly, I saw how I was inching closer to the 100 mark. Now I’m excited to be so close to hitting that milestone!

Why do you donate at Stanford Blood Center?

SBC held quarterly mobile drives at my former workplace, so it was easy to make an appointment to donate. For a while, coordinating the SBC blood drive was even part of my job. And if I missed donating at work for some reason, I’d just find a mobile drive somewhere else. Now the South Bay donation center in Campbell is close to home, not even 10 minutes away, so it’s very convenient. It’s been a good experience and the SBC team of phlebotomists are so helpful.

How did you start donating plasma and what has that experience been like for you?

My first plasma donation was during a platelet donation. There was a need that day and I was asked if I’d also donate plasma. I figured since I was already donating platelets it would be fine if they also kept my plasma. The experience was no different than what I’d become used to. In January of this year, I tested positive for COVID-19 and was deferred for the rest of the month. Then in April, I received a call from Dr. Suchi Pandey, Chief Medical Officer at SBC asking if I’d be interested in donating COVID-19 Convalescent Plasma (CCP). The plasma of my blood type was in low supply and after having COVID, my plasma would have antibodies that could help a recovering COVID patient, so I jumped at the chance to help them. In May, I started donating plasma with the Alyx machine and that has been a great experience. The machine separates and collects various blood components and returns what isn’t being used to the donor. I plan to continue donating platelets twice a month and plasma when it’s needed. That’s something that I really like, SBC won’t take what they can’t use.

What would you say to potential first-time donors who may be on the fence about donating?

I would tell them that it feels good knowing that something that your body is going to replenish anyway could save someone’s life. SBC makes it very convenient with evening and weekend hours, so the scheduling is easy. If you’re squeamish, don’t worry because the team members will take care of you and treat you with compassion. You’ll have a direct impact helping a patient in need.

What would you say to those individuals who may be considering donating plasma?

I’d suggest they read the patient stories on the SBC website to learn about the good you can do by donating and about the great need. Plasma is often needed by cancer patients, and we all know someone who has been affected by cancer, so wouldn’t you like it if plasma was available for a friend or loved one who needed it?

You can learn more about plasma donations and read other donor stories by visiting stanfordbloodcenter.org/plasma/.