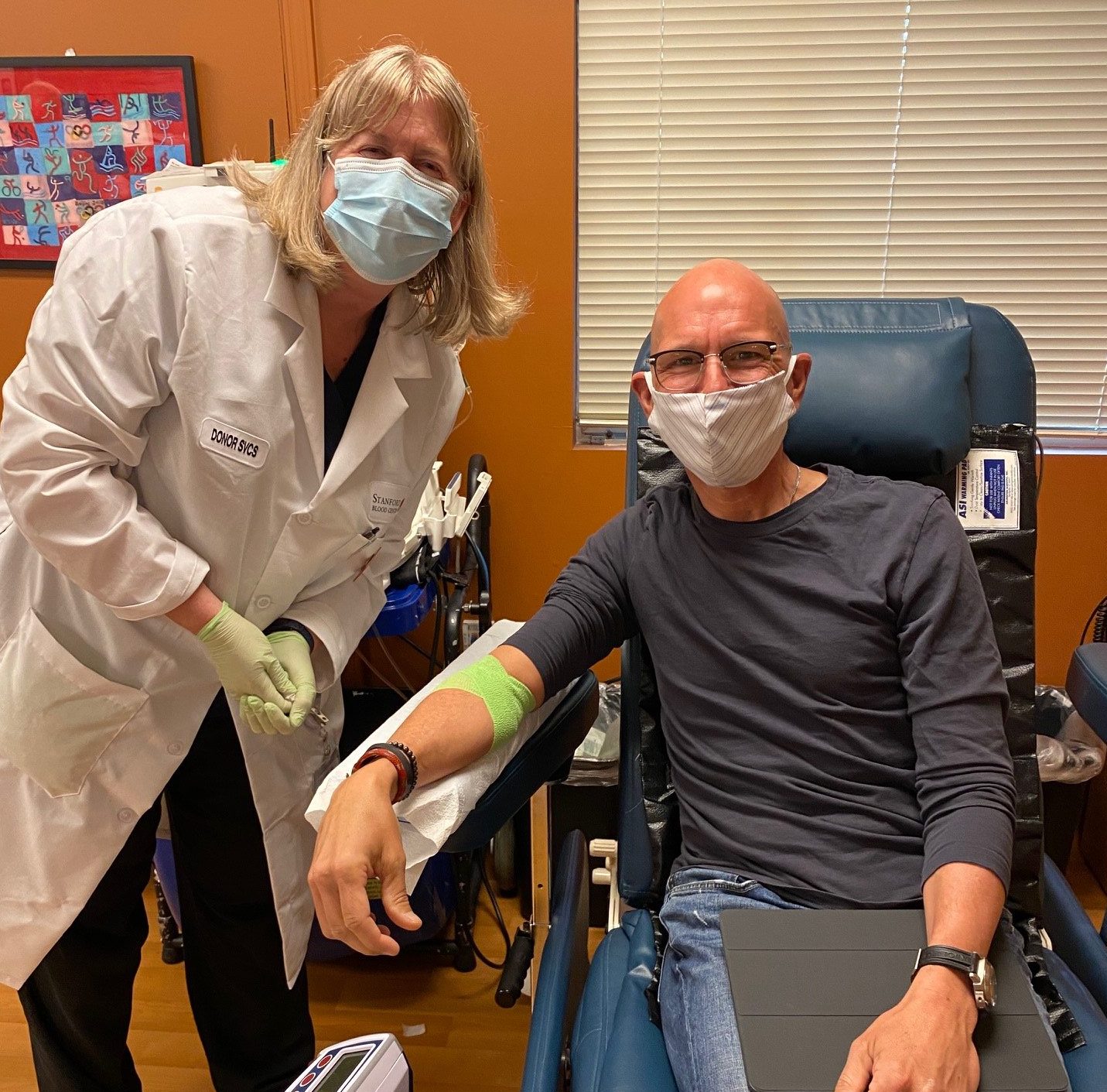 John’s CCP Story: A Unique Opportunity to Give Back

John Tallarida has been an active and passionate blood donor for most of his adult life. When John was only about nine years old, his father was hit by a tractor rig in a devastating accident, after which the doctors reported that he had only a five percent chance of surviving. Though this was an incredibly scary and stressful time for John’s family, thanks to a great care team, his father’s perseverance and many, many blood donations, his father recovered. Throughout the rest of his life, he impressed on John the importance of giving back.

While donation had always been and continues to be personal to John for this reason, the “real life implications” of giving blood became amplified after John tested positive for COVID-19 in early March, making him one of the first people in Alameda County to be diagnosed with the virus. John’s job requires him to travel often, and it was shortly after taking a flight from London that he first began experiencing symptoms of illness, which very quickly turned severe.

“I’m only 55, I am very active, I cycle and run a ton, I’m fit, I have no underlying health conditions — not even an allergy. But I had never been that sick in my life, and it was demoralizing how hard it was to come back from it,” John said.

John had all the usual awful symptoms of COVID-19: high fever, aches, difficulty breathing. For John, though, the exhaustion was the most intense. “I can’t even explain how exhausting it was. I’ve ridden bikes up massive hills and my lungs and body have never felt that spent. There were some days I was so sick I couldn’t talk. It hit me so hard that on just the second or third day of my symptoms, I got out of bed in the morning and shortly thereafter passed out from sheer exhaustion,” he said. As if the COVID-19 symptoms weren’t bad enough, John hit his head on the corner of his desk on the way to the floor during his fainting spell and woke up with a cut on his head that forced him to go to the emergency room (ER).

John’s doctor said that he was most likely was suffering from walking pneumonia. John himself had suspected simply an extreme case of the flu. Though COVID-19 was present in the community, it was in such a small percentage of the local population that John said, “I kept reasoning with myself, ‘I couldn’t have COVID-19. I’m not that unlucky.’” Later that week, however, a positive test confirmed that he was, in fact, infected with COVID-19.

While the high fever lasted only three days, the “annoyingly persistent fever of 100 or 99 degrees took forever to break,” John recalled. “In total, it took me 17 days to recover, and I spent 12 of those on my back.” 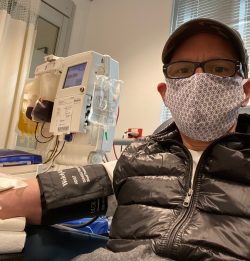 After weeks of battling the hardest illness of his life, John finally saw some light at the end of the tunnel. And once he was on the mend, he wasted no time in learning about COVID-19 convalescent plasma (CCP). Determined to help anyone he could avoid or recover from the same struggles he had undergone, he reached out to Stanford Blood Center (SBC), where he was already an established platelet donor, about the possibility of donating convalescent plasma.

Because his illness and recovery hit so much earlier than in most local COVID-19 cases, John became one of SBC’s very first CCP donors. “I worked directly with Dr. Pandey, SBC’s Chief Medical Officer, who was leading the program,” John said. “She told me my antibody levels were really high — the second highest she had seen at the time, and about four or five times the baseline required to donate — and so we have been in regular contact about tracking my antibodies each time I give plasma,” he said.

Since joining the CCP program, John has donated the maximum amount possible, even coming in every 10 days during his early donations! What’s even more amazing is that each time he donates, his plasma has the potential to help up to four patients!

When asked about his motivation for being such an outstanding donor and advocate, John said, “When you survive something like cancer, you normally don’t have the opportunity to help others with your own struggle, medically speaking. This virus is unique in that, if you’ve survived it, you have an opportunity to really help people. I look forward to going in and giving because for me, blood donation has always been an important way to give back.”

If you or someone you know has recovered from COVID-19 and is eligible to give blood, consider joining our incredible community heroes like John and applying to participate in SBC’s CCP program at stanfordbloodcenter.org/covid19plasma.