There have been many great advances in medicine over the last few decades. Patients can take comfort in the fact that doctors have more information available to them now than ever before, resulting in an improved quality of patient care. Despite these advances, devastating conditions still occur, and some remain very difficult to treat. One such example is placenta accreta, a dangerous pregnancy related condition that can affect even a healthy woman. This was the case with Kristen Terlizzi, who was pregnant with her second child when she suffered complications of this devastating disorder.

The American College of Obstetricians and Gynecologists estimates the average blood loss with placenta accreta is 3,000-5,000 mL (the average person has a total blood volume of about 5,000 mL or 10 pints). As many as 90% of patients require blood transfusions, with 40% needing more than 10 units of packed red blood cells. Even with advanced planning, transfusion management and surgical care, the maternal mortality rate is as high as 7%. And while this condition is still somewhat rare, it is much more common than it was 50 years ago. The cause is unknown but the likelihood increases with the number of cesarean sections a woman has had. An article featured in the Fall 2013 edition of Stanford Medicine, sheds light on the severity and daunting nature of this disorder and its treatment.

Kristen was a young, healthy mother of one who was thrilled to be pregnant with her second child. The pregnancy was going seemingly well and she felt great when, at 29 weeks, Kristen’s ultrasound revealed evidence of placenta accreta, despite the extremely low likelihood of 0.3 percent, according to a study published by The American College of Obstetricians and Gynecologists. She was shocked and terrified at the finding and recalls thinking, how could this happen to me? “I never knew accreta existed until I had it,” she said. Seeking out the best care she could get, she decided to work with the Placental Disorders team at Lucile Packard Children’s Hospital Stanford.

At 31 weeks, Kristen met with a specialist in the field, Deirdre Lyell, MD, and underwent another ultrasound and MRI. The situation had progressed to a dangerous state so Dr. Lyell scheduled Kristen to be admitted into the hospital at 32 weeks. The plan was to deliver the baby by cesarean at 33 ½ weeks, 6 ½ weeks early, at which point doctors would evaluate the situation and perform a hysterectomy if necessary in order to stop any hemorrhaging. This combination cesarean-hysterectomy is often the best strategy doctors have to stop life-threatening bleeding and give birthing mothers the best chance at survival.

When doctors delivered the baby, they were surprised to find that the invasion of the placenta was much worse than expected. They were now dealing with placenta percreta with high vascularity and multi-organ invasion. The team of specialists assigned to her care was not confident in being able to successfully separate Kristen’s placenta from the surrounding organs at that moment. The team therefore decided to monitor and reevaluate Kristen.

Kristen was closely monitored for the next seven weeks of her post-partum stay in the hospital. The placenta remained inside her body – an approach doctors had never tried before – as they waited for a change. “It was very uncertain for weeks. There was such 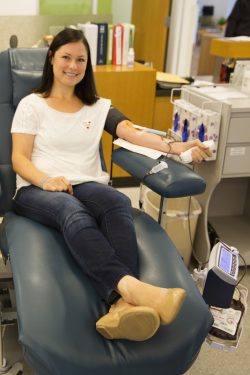 little data on this approach and the team really wasn’t sure which way it would go, or what to expect,” Kristen said. She ended up undergoing multiple surgeries; the final one was an emergency surgery that finally allowed doctors to remove the placenta and uterus along with some organs, and repair other critical organs that were affected. The surgery lasted 8 hours and Kristen was transfused 26 units of blood products. “The situation became much more dire than we had ever expected. It was really scary,” Kristen recalls.

Mom and baby are now doing great. To bring awareness to this condition and the importance of blood donation, Kristen celebrated the one-year anniversary of her last surgery by donating blood at Stanford Blood Center. She now acts as an advocate and mentor for others that are experiencing similar situations and speaks to groups about placenta accreta and blood donation.

Kristen thinks about the donors whose blood was available to save her life that day and is forever grateful. “ I am so grateful for all of the strangers who donated the blood that became critical to my case. I consider those donors just as important to my outcome as the many doctors and nurses in the operating room that day. Without that blood, my story would have a much different ending,” she said.

Please make an appointment to donate blood with Stanford Blood Center to ensure future patients have the products they need. It is because of the talented staff at Stanford Hospital and the blood of many selfless donors that Kristen is alive today and able to enjoy being a mom to her young children.