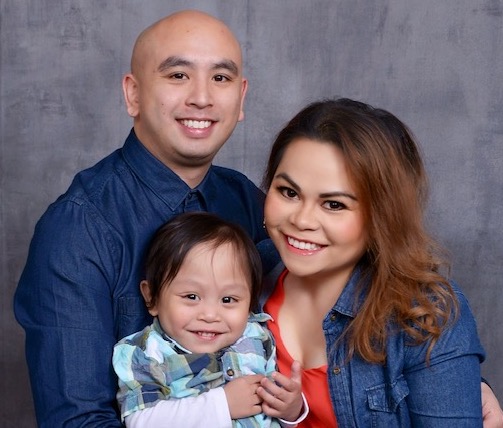 The Lees’ Story: Bound by Blood — and Liver

Gracielle Lee went into labor with her first and only child, Bryson, when she was just 22 weeks pregnant. At such a critical period, she, her husband Barry and their care team were anxious to delay delivery as long as possible. “Bryson’s likelihood of surviving at 22 weeks was very low so, if we wanted to save him, we’d have to stay at the hospital as long as possible, hopefully until at least 24 weeks to give him the best chance ,” she said. “The first couple of days were terrifying, just thinking about the risk of losing him. But we decided, if he was going to fight, we were going to fight, too,” Gracielle said.

After six weeks bedridden in the hospital, Gracielle finally gave birth to Bryson at about 29 weeks. And, while her ability to hold Bryson in for those additional weeks was immensely helpful, his birth wasn’t without complications. Bryson needed significant transfusions and, on top of the usual concerns doctors have for preemies, Bryson exhibited signs of impaired lung function. Perhaps most concerning was his liver function — or lack thereof.

Within just a few weeks of being born, Bryson was diagnosed with biliary atresia, a condition caused when the system that moves bile from the liver to the gallbladder does not develop properly. “When we first got the diagnosis, we were heartbroken, and a little lost and confused, too,” Gracielle said.

Doctors tried a preliminary procedure to fix the problem but ultimately determined that, at just about eight months old, Bryson’s only hope of survival was a liver transplant. Without hesitation, Barry volunteered. “When the doctors said, ‘liver transplant,’ there was no question. Either one of us would volunteer to save our son,” he said.

So, within just months of Gracielle’s extended hospital stay, it was now Barry’s turn. “The process for getting approved for the transplant at Lucile Packard was pretty smooth,” he said. “It was six or seven hours of running tests, talking to doctors, talking to psychiatrists. Then I spent one week in the hospital after my surgery and went home for a fairly lengthy recovery.”

During this time, Barry had limited mobility and needed extra help at home — but, at the same time, Bryson was still in the hospital recovering from his transplant. Gracielle split time between her two loved ones during their recovery. Bryson needed extra attention as he faced multiple complications and caught an illness that, given his weakened immune system, was particularly dangerous. 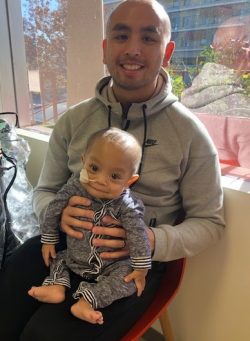 Finally, four months post-surgery, Bryson was released from the hospital and sent home with very intricate care instructions. “It was a very emotional and stressful time. I had to leave my job after six months because it was very overwhelming trying to take care of all of the equipment and care Bryson needed at home, plus trying to be an attentive wife and take care of my husband as he was recovering, too,” Gracielle said.

For Barry’s part, it was a struggle, wanting to step in and support the family but being limited by his own need to heal, too. “The best thing I could do for us was to try to keep us positive and keep us calm. I tried to keep a level head as best I could and help my wife and I look on the bright side when things were looking bad,” he said.

Ultimately, the family fought past some close calls and Bryson’s liver transplant was successful. Though Bryson still needs check-ins and extra care for some other developmental delays associated with his premature birth, over time, the hospital visits have become fewer and further in between and the family has found their “own sense of normal.” In addition to the blood donors who supported Bryson, they’re also extremely thankful for those who supported their family at Stanford Hospital. “We wouldn’t be where we are today if it weren’t for all the incredible surgeons, doctors, nurses and care team who took care of Bryson during his most difficult times!” Gracielle added.

Bryson is now three years old and a true bundle of joy. “He’s such an amazing little kid,” Barry said. “He’s super friendly, he absolutely loves people. He loves playing with balls, eating mac and cheese and exploring anything new.”

“I couldn’t imagine if he hadn’t gone through this, how much different he might be. I’d like to think it all happened for a reason and it has helped shape him into the loving, outgoing kid he is,” Gracielle added.

Having each given so much of themselves to save their child, both Gracielle and Barry are advocates for blood donation and organ donation and use their story to encourage others to educate themselves about the needs of patients like their son. You can learn more about how to support transplant recipients like Bryson — and how to become an organ donor like Barry — at stanfordbloodcenter.org/sbc-dnw.