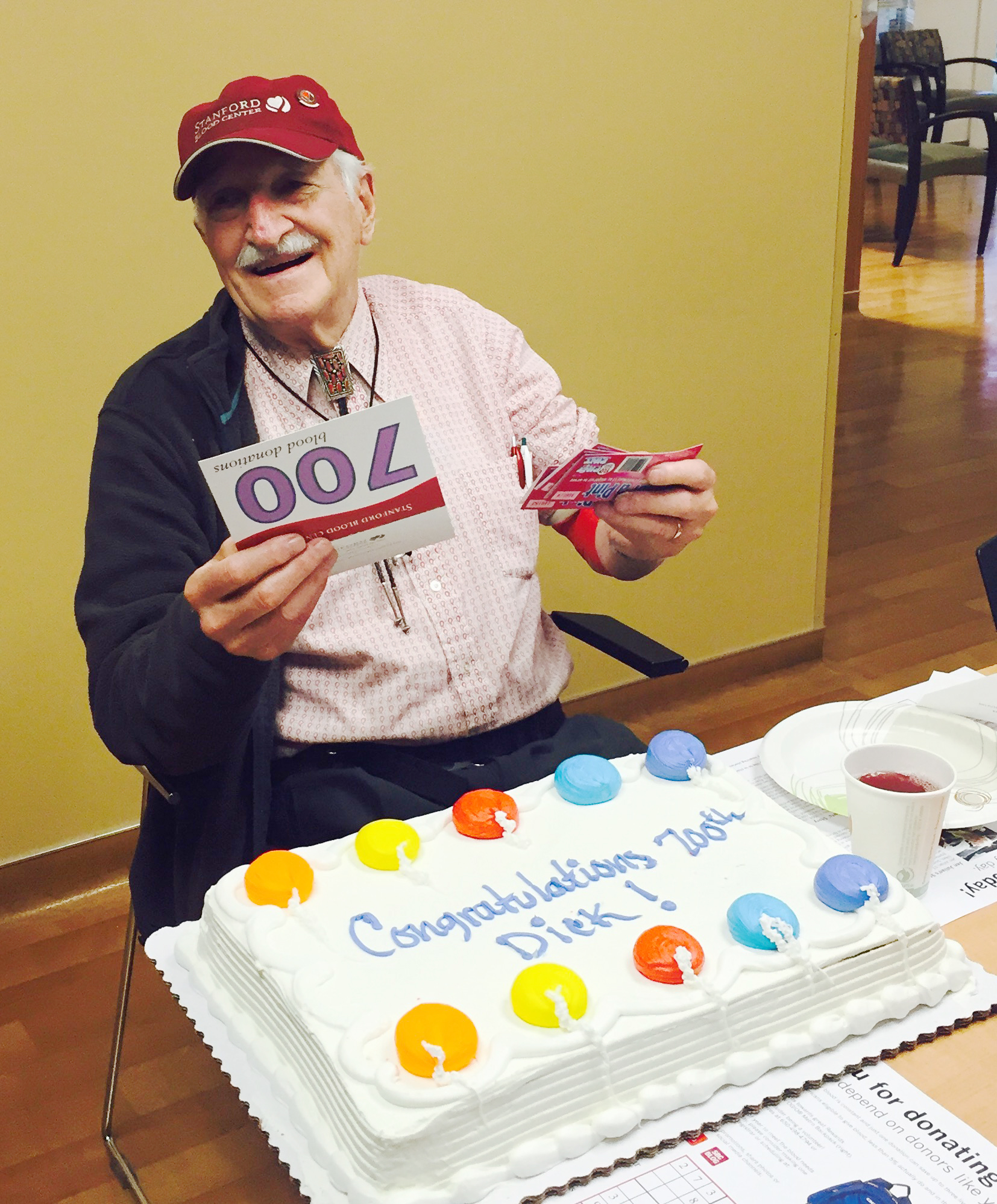 We are very sad to announce that long-time donor Alden Richard “Dick” Tagg has passed away. Dick was a kind and generous man – many people at SBC got to know him well over the years that he donated platelets with us. He was one of just two donors that reached 700 lifetime donations, a true testament to his passion and dedication for helping others. We would like to honor the memory of Dick by re-sharing our most recent blog post celebrating him.

This month Stanford Blood Center (SBC) is celebrating the incredible accomplishment of one of our loyal donors, Mr. Alden Richard Tagg. Richard recently reached his 700th donation with SBC, a rare achievement.

Richard started donating blood about 40 years ago when he saw an advertisement in the local paper asking for people to donate; Stanford Hospital was looking for white blood cells for research to help pediatric leukemia patients. He and his wife had their own small children at that time and wanted to support community patients and their families.

The research project eventually moved to Seattle and there was no longer a blood center in the area where Richard and his wife could donate, until Stanford Blood Center opened in 1978. Richard and his wife made appointments right away to start donating again. After several whole blood donations, they started donating platelets, and Richard has continued to do so approximately every two weeks since. In fact, he is so passionate about donating that he has spent as much time over the years trying to recruit new platelet donors as he did donating himself. “It was nice to be able to donate platelets and then be able to talk to other donors in the canteen afterward and encourage them to do the same,” Richard said.

When asked what motivated him to continue to donate all these years, Richard said, “It’s something to feel proud, it’s the right thing to do. And it helps that there is a lot of camaraderie among the donors and staff.” When asked how it feels to be one of the few SBC donors (so far) to reach 700 donations, he said: “It’s a real accomplishment. I’m pleased to be involved and I can look back and say this is something I did that was good.”

SBC is so glad to have dedicated, long-time donors like Richard. Over the years, he has helped save countless lives and we are honored to be part of his accomplishment. Richard shared some final words of wisdom for future donors: “There are so many reasons for someone to donate if they can. You make such a difference in someone’s life every time. All you have to do is get to the blood center.”

Thank you, Richard, from all of us here at SBC. You are an inspiration. To make your own appointment, visit us at sbcdonor.org.