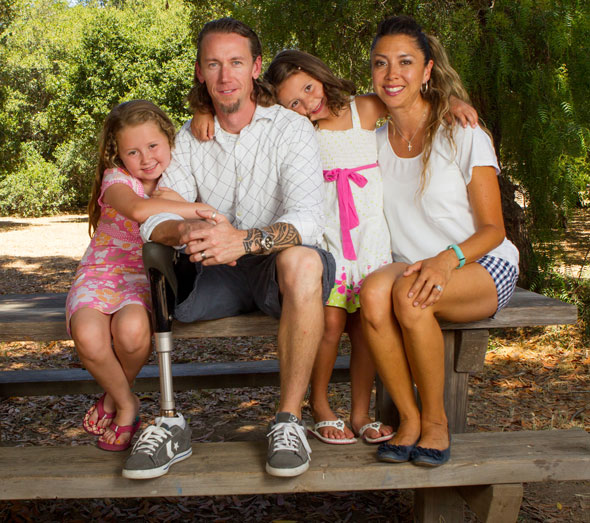 The Road to Recovery

Motorcycle enthusiast Ryan Roberts usually did not ride his motorcycle to his job at Stanford Video. But back in 2004, the Fourth of July fell on a Sunday, and he was supposed to have that Monday off from work. He got called in last minute and was only going to be there for a little while, and with no traffic on the road, he decided to take his motorcycle.

But it proved to be a devastating, life-altering day for Ryan.

Traveling on the highway, Ryan thinks he must have hit something in the road that threw him off course enough to hit the guardrail. The last things he remembers was thinking, “That guardrail is getting close, I am not going to be able to get out of this,” before hitting the wall … and then, his bike starting to wobble … and then trying to stand up. But his leg was up by his shoulder.

On that terrible day, he lost his leg above the knee. He also shattered bones in both forearms and broke almost every bone in his hand, nearly losing that arm as well. He lost nearly 80% of his blood lying on the freeway. The first person to stop for him was an off-duty fireman. He took his belt off and wrapped it around his leg as a tourniquet. The second person was a nurse on her way to Stanford Medical Center, and the third person, a doctor on vacation from Virginia. Needless to say, the odds were in his favor that day. Although Ryan was still awake, he does not remember this part … they told him about it afterward.

He is thankful to these first responders, and he is also grateful for the blood donors who were there for him when he needed them. “I don’t know how many units I received, but I was told that I lost about 80% of my blood that day … and I’m forever thankful for the people who donated blood. I wouldn’t be here today without them.”

Before his accident, Ryan was no stranger to Stanford Blood Center (SBC)—he had donated blood before, proving he has always been a man of heart. He has even donated after his accident. But on July 5, 2004, he needed blood donors … and SBC donors came through for him.

Thankfully, Ryan did not suffer any internal injuries, and while his road to recovery was not easy he spent just one week as a patient at Stanford Hospital, then two at Kaiser Permanente—including one week of rehab to regain his strength after being bedridden for almost two weeks. He still has two steel plates in his arms as well as his prosthetic leg… but he has overcome a huge adjustment to his new reality. In the end, thanks to Ryan’s courage, the kindness and skill of three first responders, and the blood donors who made sure blood was on the shelves on the day he needed it, Ryan did more than just pull through; he is living life to the fullest. He went back to work at Stanford Video, got married and was even able to swing dance to the first dance at his wedding. He now has two wonderful children, and loves being a dad. He even got back on a motorcycle at one point, only around a parking lot, just to prove to himself that he still could.

So as the holiday weekend approaches, please remember Ryan’s story and that blood centers always feel extra pressure as summer heats up; regular donors go on vacation, and with more people traveling there tend to be more accidents—that is especially true around the Fourth of July holiday. And at SBC, many of our regular donors are students, staff and faculty who are not around during the summer months. If you can donate, making a summer appointment now is one of the best things you can do to make sure our community is prepared this summer. It could make all the difference to someone like Ryan.