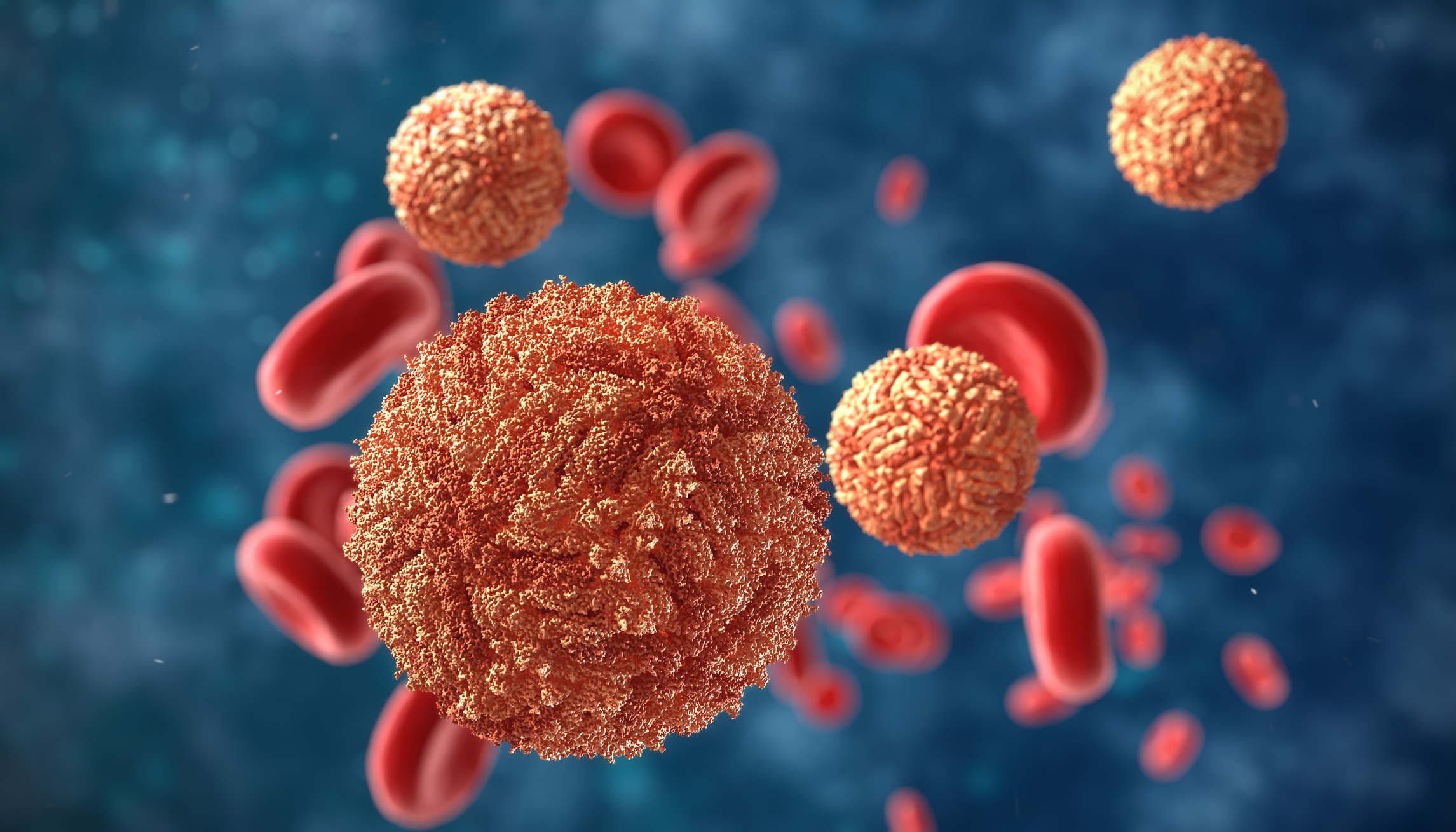 What’s Up with Zika? What Have We Learned Over the Last Few Years and Where Are We Now?

In 2016, the world was in the midst of a Zika outbreak, with the largest occurring in 2016 in Brazil and Columbia. The graph below shows the distribution of Zika cases in Central America, the Caribbean, and South America from 2015–2017. 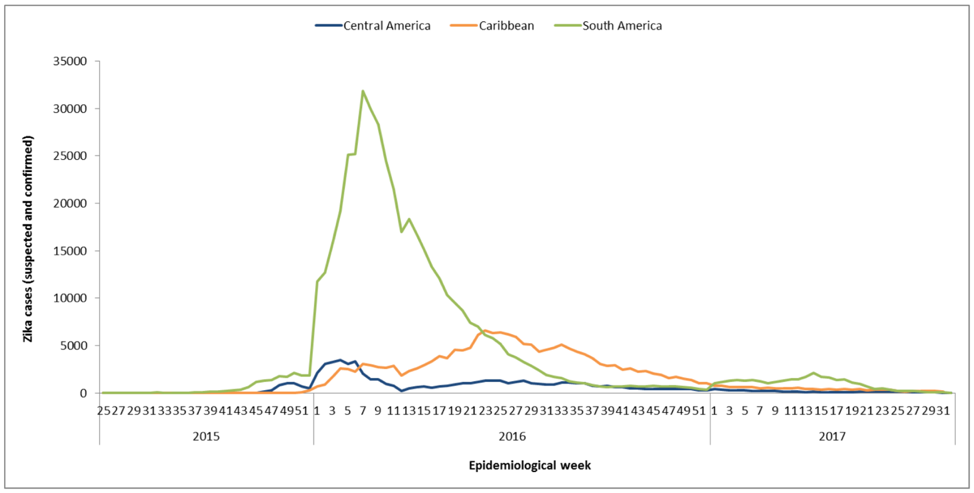 Source: Data provided by countries and territories of the Americas and reproduced by PAHO/WHO

In the continental US, Zika cases also peaked in 2016, with the majority of cases occurring in people who had traveled to high-risk countries (although local mosquito transmission was reported in Florida and Texas). Overall, there have been 5,740 symptomatic Zika cases reported in the continental US from January 2015 to December 2018, of which:
• 5,454 cases were in travelers returning from affected areas
• 231 cases were from local mosquito transmission
• 55 cases through other routes including sexual transmission (52 cases), lab transmission (2 cases), and person-to-person through an unknown route (1 case)

It is clear from the graphs above that the number of cases has decreased significantly since 2016, and Zika no longer dominates the news. However, it is important to remember that Zika virus is still a major risk for travelers and residents in parts of the world. The CDC recommends that pregnant women not travel to areas with risk of Zika. Fortunately, in 2018 there have been no local mosquito-borne Zika transmission cases in the US, but the map below indicates the areas in the world that are still currently at risk for Zika which includes some US territories such as Puerto Rico and the US Virgin Islands. 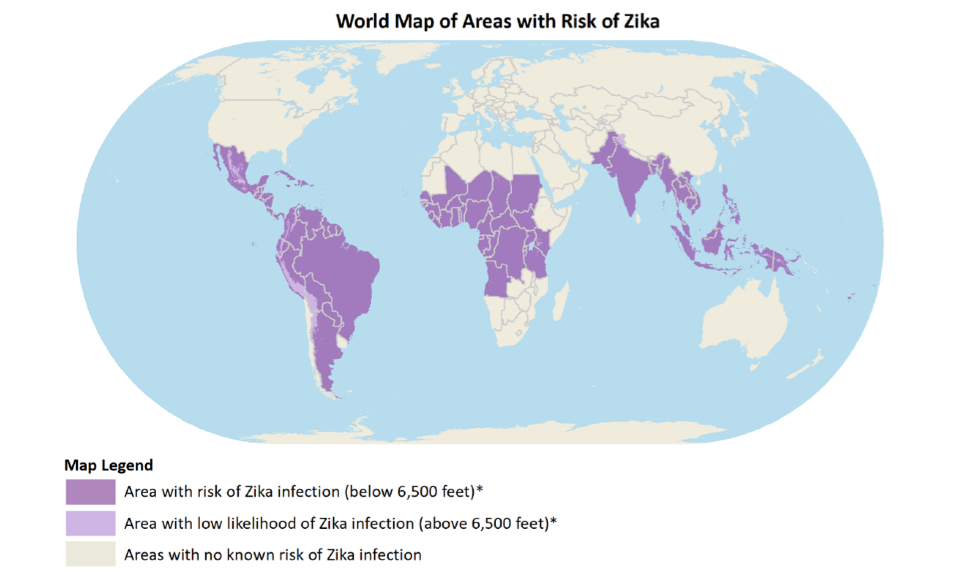 What Have We Learned?

During the recent outbreaks, much has been learned about Zika virus including the clinical consequences, modes of transmission, viral persistence in blood and body fluids, and risk in blood donors.

Zika virus is an arbovirus closely related to the West Nile virus and dengue virus which is primarily transmitted by the Aedes aegypti mosquito. Most people with Zika are asymptomatic or only have mild symptoms such as a fever, rash, headache and joint pain. However, Zika can occasionally be associated with Guillain-Barre syndrome which causes a temporary paralysis, and Zika infection in pregnant women can cause severe birth defects, such as microcephaly, and even infant death.

Studies have shown that Zika virus can persist in plasma for 11-17 days and urine for 6-10 days. It can also be found in semen for 28-41 days (in one man it persisted for 281 days) and sexual transmission especially in the first few weeks after infection can occur. Transmission can also occur through transfusions and three possible cases of transfusion transmitted Zika infections have been reported in Brazil.

What is the Risk of Zika Virus in California?

California along with New York, Florida, and Texas have the highest number of Zika cases related to travel, accounting for over half of all cases in the US. The map below shows where Zika cases in the US have been reported in 2018 and the majority of cases have been in California. 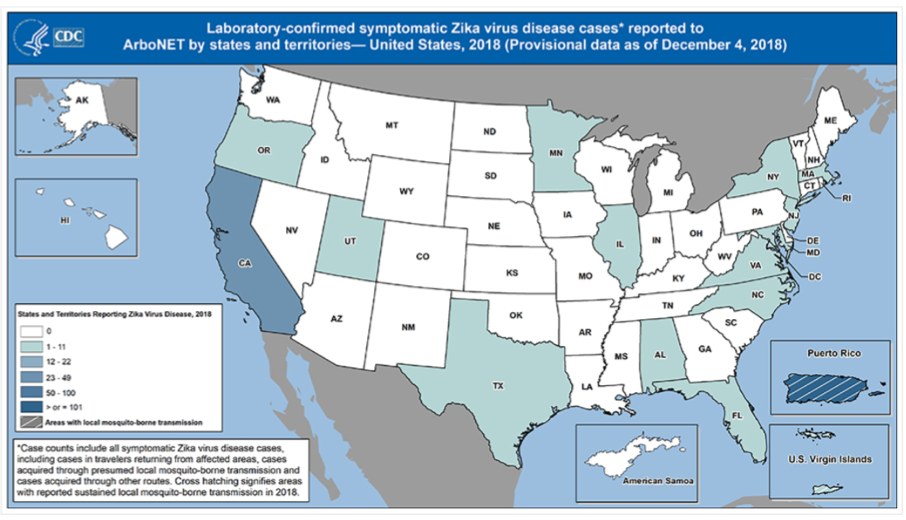 Recently, the California Department of Public Health published an analysis of 588 travel-associated Zika cases during 2015–17 compared to the distribution of Aedes aegypti and albopictus mosquitos, both of which can transmit Zika. Both these mosquitos have expanded their footprint in California over the last few years, and the map below shows the overlapping occurrence of Zika infections (viremic patients) and the vectors, especially in Southern California. Fortunately, despite the presence of the mosquito vectors in areas with a high number of travel-associated cases, no mosquito-borne local infections have been reported in California. 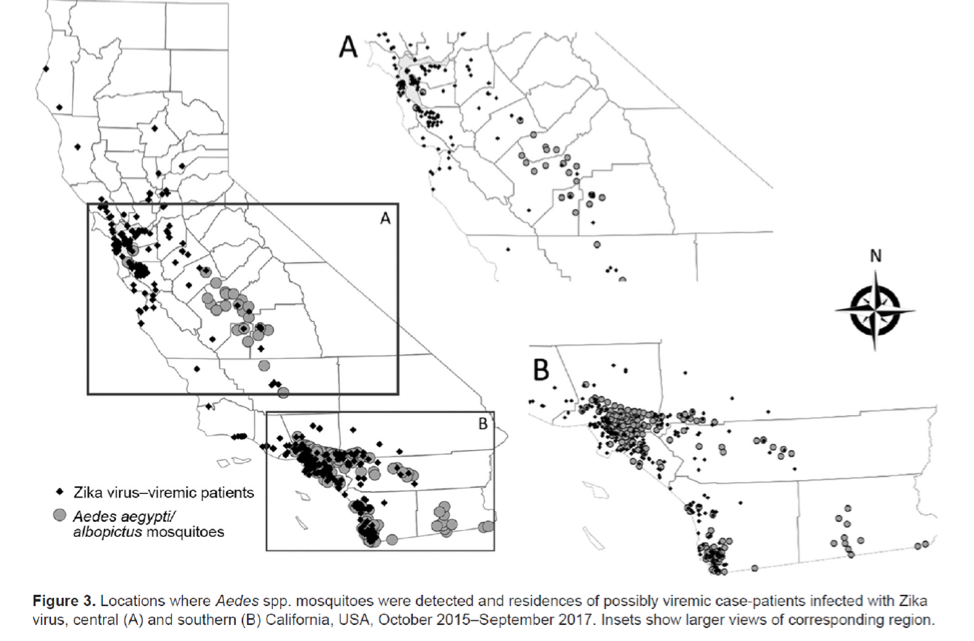 The reason for the significant decline in cases worldwide since 2016 is not known, but two possibilities include:

Unfortunately, at this time there is not good way to predict when the next epidemic will occur. However, one sure-fire way to decrease Zika transmission rates is the development of an effective vaccine against Zika virus. Although no vaccine has been approved by the FDA yet, the National Institute of Allergy and Infectious Diseases is developing and evaluating multiple different type of Zika vaccines. An approved vaccine will be a game-changer, and we hope it will available if another endemic hits.

Donate blood. Save a life.

Make an appointment today to donate blood at sbcdonor.org.