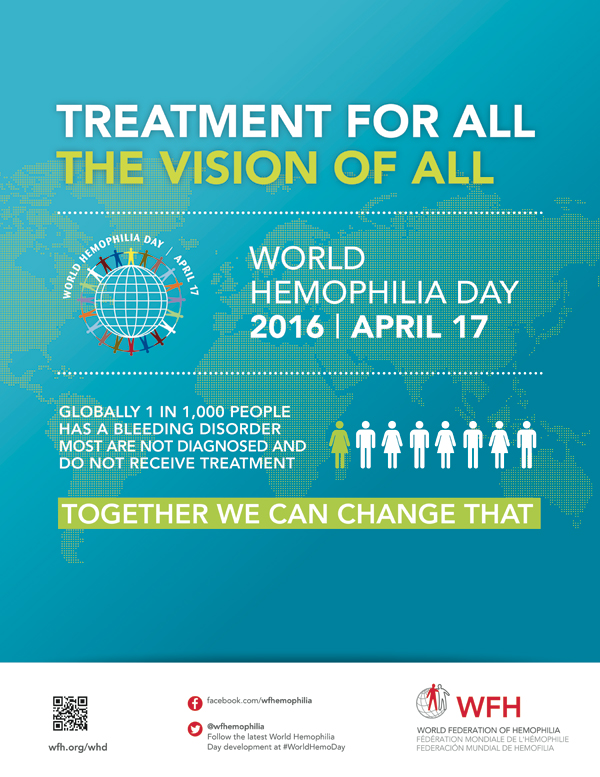 Here at Stanford Blood Center (SBC), we know blood is the liquid of life. So imagine living life knowing that if you happen to get injured or need surgery, you could potentially bleed to death. That is an extreme case, but some people with severe hemophilia face this fear daily. Then again, there are others with bleeding disorders that go through life undiagnosed and untreated, something the World Federation of Hemophilia hopes to change. This April 17, 2016 marks the fourth annual World Hemophilia Day, a day to raise awareness and support those living with bleeding disorders.

What is a bleeding disorder?

Bleeding disorders are a group of disorders where the blood clotting process doesn’t work properly and the person affected bleeds longer than normal after an injury, surgery, or even menstruation. There are numerous essential clotting factors produced by the body; if any one is defective or deficient, blood clotting is affected. Globally, 1 in 1,000 people have a bleeding disorder.

Hemophilia is a type of bleeding disorder caused by lacking or having defective factors VIII (8) or IX (9) clotting proteins. People with hemophilia do not form clots normally or effectively, causing them to bleed for longer periods of time than normal. One of the complications that hemophiliacs can suffer from is internal bleeding, which can damage organs and tissue. Hemophilia is most commonly inherited but can also be acquired and ranges from mild to severe, depending on the activity of clotting factor in the blood. According to the U.S. Centers for Disease Control, hemophilia occurs in about 1 of 5,000 live births, mostly males.

Whether you or someone you know if affected by a bleeding disorder or hemophilia, there is always a need for blood products in your community. Make an appointment today at sbcdonor.org. For more information on World Hemophilia Day 2016 and how you can get involved in raising awareness, visit http://www.wfh.org/en/whd.