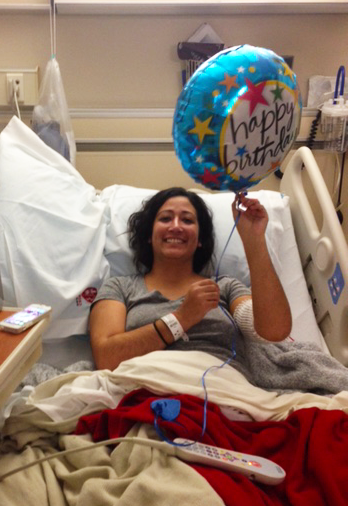 In May of 2013, Nicole Porto was thriving in all aspects of life. She had built up a life for herself that she was proud of. Physically, she had been training for the Brooklyn Half Marathon and felt extremely strong; socially, she had a great group of friends in her home of New York; and professionally, she was chasing her dreams, working in marketing and social responsibility for a diamond company who prided themselves on giving back to the communities within Africa that mined precious metals and stones.

In June of 2013, just weeks after an impressive finish in the Brooklyn Half Marathon, Nicole knew that something was off. She had been feeling tired for weeks, though she hadn’t let that bother her, as she chalked it up to the long hours preparing for her race as well as a large industry event she had been preparing for in June. It was at the event, however, that she noticed not only was she tired, but also she was badly bruising.

“It was at the jewelry trade show in Las Vegas that I really noticed that I was bruising from every touch. I would sit in a chair and the back of my legs would bruise, or I would hold my purse on my arm and my arm would bruise. It was scary but, even then, I didn’t imagine the worst-case scenario,” she said.

Shortly after the trade show, she had planned a trip home to Fremont to visit her family. Once she was home, it became obvious that her next stop would have to be urgent care.

After running a number of tests, doctors informed Nicole that her blood counts were dangerously low. She was quickly transferred to Stanford Hospital, where she was diagnosed with aplastic anemia, a rare blood disease in which bone marrow is unable to produce healthy amounts of red blood cells, white blood cells and platelets.

Because the disease was so rare, there was little peer support and few resources available, and while her doctors did their best to explain her condition, it took a while before the severity of her current state fully registered with her and her family. It truly was a matter of life and death. 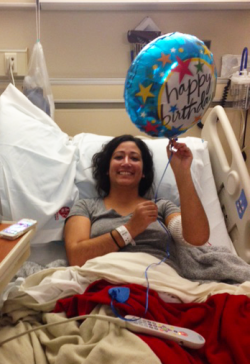 Nicole on her “transplant birthday,” the day she received her bone marrow

In order to stabilize her blood counts long-term, Nicole would need a bone marrow transplant. Transplants, however, require the availability of a matching donor, and even after that donor is found, months of testing and preparation on the part of both the patient and the donor.

In that interim period, Nicole relied on transfusions of both platelets and red blood cells to keep fighting. “For six months, I went to the cancer center every day or every other day to receive transfusions. These were long transfusions that took four to six hours, and because the doctors were worried I would have an allergic reaction to the blood I was receiving, I also received a heavy dose of intravenous Benadryl each time, which made me feel like I was in a constant haze.

“I was so quickly and suddenly dragged out of the active life I had in my 20s — a life that I had chosen for myself where I was becoming successful and was on the path that I wanted to be on,” she said. In those circumstances, it could get very hard to keep hope alive, but in addition to the prospect of receiving a bone marrow transplant, she was surrounded by an extremely strong support system who drove her to and from appointments, were there with her when she received difficult news, took care of her when she was at home and even just took her mind off of her critical situation.

The other major factor in her staying positive had to do with her frequent transfusions. “When it comes to the blood products, I looked at those bags of blood like they were my lifeline. Every day I received them, I felt so grateful and relieved because I knew they were my medicine, sustaining me and keeping me alive to hold on for a cure. Getting blood products becomes one of the tangible sources of hope. They were my little bags of life. I always looked forward to getting my blood results back after I received a transfusion because it showed me whether I would live or die, the progress I had made.”

In December of 2013, Nicole finally received her bone marrow transplant. “When my family and I saw that little bag of marrow before the transplant, we were crying because it took on a meaning that was profound, so huge. It really was my new life,” Nicole said.

But the recovery process wasn’t as simple as Nicole and her loved ones had hoped. After unexpectedly facing a frightening complication seven months post-transplant, she faced yet another setback that next February. Both complications left her relying on transfusions once again.

It was not until June that she was finally told that she was healthy and could go on living her life… but at this point, after a year and a half of battling anemia, her physical struggles gave way to a psychological one.

After having to put her life on pause for so long, Nicole realized that that life she thought was waiting for her didn’t make sense anymore. Before her illness, she had lived in Africa for two years working to protect the human rights of mining communities there. Now that she was immunocompromised and needed quick access to doctors, she realized she could likely never go back. She also struggled with a shift in perspective, from seeing herself as successful to seeing herself as extremely unlucky.

“For so long, I had to be home while everyone else was traveling, getting married and in careers, just moving on with their lives. Coming out of my illness, I felt so different, but the world around me felt the same. No one could fully understand what I had gone through, and that made it difficult for me to connect to even those closest to me.”

Depressed and overwhelmed, Nicole knew that she needed to create a new path for herself — one that used her struggle and made meaning out of it. 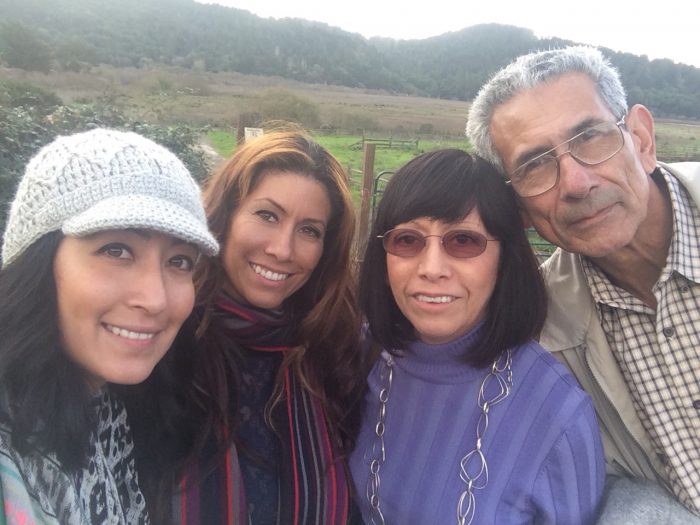 Nicole, healthy and with her family following treatment

Due to the frequency of her transfusions, Nicole had come to know various people around the cancer center fairly well. One of the acquaintances she met through the hospital was a social worker who proved to be a critical connection. Not only did she refer Nicole to a trauma therapist, but also she told her about the Patient and Family Partner Program (PFPP) at Stanford Healthcare.

The PFPP was designed to give former patients the opportunity to tell their stories and represent the patient perspective to hospital staff. “I got to share so many messages, primarily how the staff — from the nurses to the people at the front desk — helped me survive my illness with their empathy. The extra steps they took to make my family and me feel cared for truly made all the difference.

“By acknowledging the impact those teams had had on me, I felt like there was finally a reason why I had gone through this struggle. My purpose was now to do what I could to make things better for other patients.”

After working in the PFPP, serving on the Cancer Center Advisory Council for Adolescents and Young Adults, and helping at various improvement events and initiatives throughout Stanford Healthcare, Nicole moved back to New York, where she continues her work in patient experience at The Mount Sinai Hospital. Though working in patient experience can be difficult, she never regrets her decision to shift her life path. “I feel so strongly connected to what I do, so much more than I ever have before” she said. “This is my purpose now.”

To read the full spring 2020 edition of PULSE, visit stanfordbloodcenter.org/pulse.