A Close Shave with Barber-Surgeons 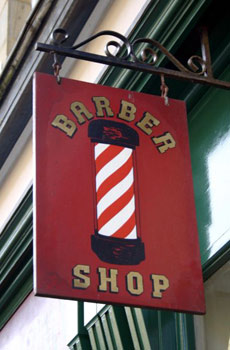 Phlebotomy was once a hair-raising occupation. The PBS series Red Gold: The Epic Story of Blood tells of a specialized medical practitioner that arose in the Middle Ages: the barber-surgeon. Not only could you get your hair cut at the barber shop, but the barbers performed some minor surgical procedures such as blood letting as well. They created their own guild, competed with doctors, and advertised their services with their unique barber’s pole still in use today.

Their candy cane pole “represents the stick patients would grab while being phlebotomized; the white stripes represent the bandages and the red stripes, the blood.” I wonder what medical history questions would have been like back then

Incidentally, it was reported today on NPR’s Morning Edition that “Barbers in several states are pushing legislation to prevent shops without a licensed barber from using the striped pole. Some states are even proposing fines. They’re already in effect in Ohio and extend to pet grooming facilities, which can be fined up to $500 for using the pole.”

What’s next for Ohio barbers – phlebotomy?