AIDS epidemic: The initial response of the government and blood banking organizations

In 1981 the first cases of AIDS were reported in a cluster of homosexual men. In the two years following this report, the disease was diagnosed in many more homosexual men as well as in intravenous (IV) drug users, hemophiliacs, and transfusion recipients. The pattern of cases led the U.S. Public Health Service (PHS) to conclude in March 1983 that AIDS was caused by an infectious agent that was transmissible both sexually and parenterally. Recognizing that some asymptomatic individuals likely harbored the etiologic agent for AIDS, and that this agent was transmissible by blood, the PHS recommended in March 1983 that blood centers request that members of groups at increased risk for AIDS voluntarily refrain from donating blood. AIDS risk groups were defined, at that time, as sexually active homosexual or bisexual men with multiple partners, Haitian entrants to the United States, present or past abusers of IV drugs, patients with hemophilia, and sexual partners of individuals in the above groups. Blood centers around the country implemented the PHS recommendation by providing prospective donors with an information sheet that described AIDS risk groups and requested that donors exclude themselves if they met the definition of risk.

It was predictable, however, that this approach wouldn’t work very well. First, it relied entirely on donor self-deferral. Second, the PHS definition of homosexual AIDS risk behavior was vague, making it possible for a prospective donor with a history of homosexual activity to feel that he personally was not at risk for AIDS and to proceed with blood donation. Nonetheless, in the spring of 1983, a joint statement issued by the American Red Cross (ARC), American Association of Blood Banks (AABB), and the Council of Community Blood Centers estimated the risk of getting AIDS from transfusion as “one in a million”. This proclamation, intended to reassure the public, was based on the small number of reported AIDS cases as of that date; it did not take into account the epidemic pattern of spread and the lag between infection and development of clinical illness.

In the years that followed, the number of reported transfusion-transmitted AIDS cases increased geometrically, and it became apparent that the above statement, which was never retracted, underestimated the risk of transfusion by several orders of magnitude. In the spring of 1983 two patients with AIDS were treated at Stanford Hospital. Neither patient belonged to any of the identified AIDS risk groups, but both patients had received transfusions at other institutions in the San Francisco area and likely represented cases of transfusion-transmitted AIDS.

At this point, my colleagues and I at Stanford Blood Center felt that the presence of the presumed etiologic agent for AIDS in the local blood supply could not be ignored. Because of the potential lethality of this infection, we felt that self-deferral should not be relied upon as the sole means of protecting the blood supply.

An unusual aspect of AIDS was that every patient, as well as many high-risk persons without symptoms who went on to develop the disease months to years later, had a selective loss of white blood cells called CD4 T cells. In the year prior to the appearance of AIDS, my research group at Stanford Blood Center had identified these cells as playing a critical role in initiating immune responses. The loss of CD4 T cells in AIDS is what renders patients susceptible to a wide range of infectious diseases. Another population of white blood cells, called CD8 T cells, is generally spared in patients with AIDS until very late in the disease. Thus, the ratio of CD4 to CD8 cells (CD4/CD8) in the blood of AIDS patients and many high risk individuals was reduced from the normal level (approximately 2:1) to less than 1. 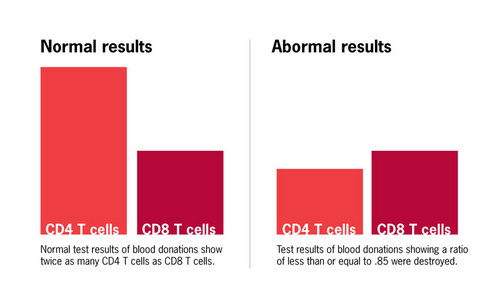 Since T cell abnormalities appeared to be a direct consequence of infection with the AIDS agent, we believed that testing for a reduced CD4/CD8 ratio would prove effective as a “surrogate” screening test for blood donors, even though we knew that transient inversions of this ratio could occur under benign conditions not related to AIDS. Because of my long-standing research interest in T cells and their subsets, we had access to a specialized instrument called a flow cytometer on which we could perform CD4/CD8 ratio analyses. Our particular instrument, which was commercially available, could be used for rapid testing of large numbers of samples. The cost of each test, including reagents and technician salary, was approximately $10. To assess the potential utility of this test, we carried out a pilot study on AIDS patients, individuals at high risk for AIDS, and healthy individuals who had no known risk. In this study a CD4/CD8 ratio of less than or equal to 0.85 identified all AIDS cases and the majority of likely AIDS carriers. Based on these results, in July 1983 Stanford Blood Center began screening all blood donations for reduced CD4/CD8 ratio, and blood from donors with a CD4/CD8 ratio less than or equal to 0.85 was destroyed.

In some donors, the abnormality resolved spontaneously, and future donations with normal ratios were transfused. However, the abnormality persisted in donors with a severely reduced ratio. Eight months after initiation of the T cell testing program, we were informed that a blood donor had been diagnosed with AIDS. His only donation to our center had occurred during the first month of the T cell testing program. This donation had been discarded because of a CD4/CD8 ratio of 0.29. This result represented early confirmation that our T cell screening program was successfully removing at least some AIDS-contaminated units. However, multiple units of blood donated by this individual at other blood centers during the preceding 3 years had been transfused. 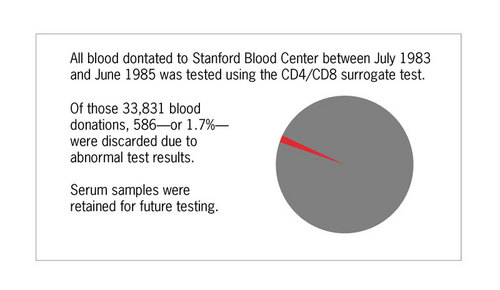 Serum samples retained from these donors with low CD4/CD8 ratio were tested for HIV antibody when this test became available in 1985, and 1.9% were positive for antibody to HIV. 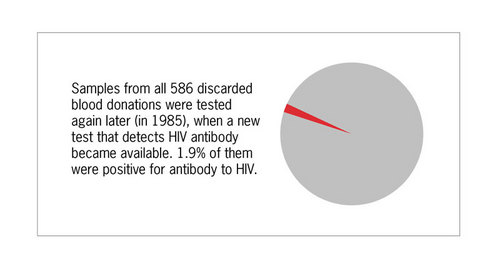 Thus we estimate that the T cell screening program removed from the blood supply approximately 1.9% of 586, or 11 HIV-infected blood donations. Our blood center typically divides blood donations into three components (red cells, plasma, and platelets), each of which is potentially transfused into a different patient. Therefore, our removal of 11 HIV-infected units protected up to 33 patients from acquiring this disease. 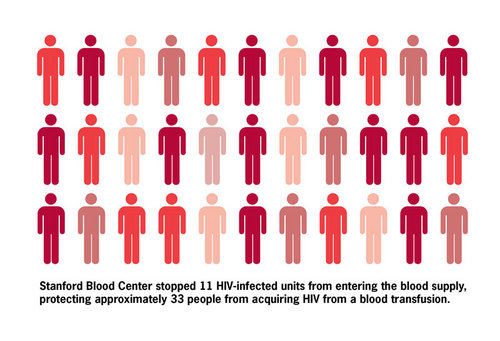 Criticism of our test

Despite the fact that by 1984 cases of transfusion-transmitted AIDS were increasing rapidly, neither the government nor national blood banking organizations recommended testing donor blood for AIDS. Indeed, despite evidence that high-risk individuals were showing up as blood donors, and that our blood test was effective at identifying such individuals, the blood banking organizations actively opposed the use of our test. They thought it was too expensive, that positive tests would reduce the number of eligible donors and cause blood shortages, and that high-risk individuals would present as blood donors simply to obtain a free AIDS test. With regard to our own program, we experienced no blood shortages as a consequence of discarding units from donors with abnormal T cell ratios, nor was there any evidence to suggest that individuals at high risk for AIDS donated blood as a result of our T cell testing program. In fact, the percentage of donors with abnormal CD4/CD8 ratio decreased over the two years of donor T cell testing, presumably due to self-deferral.

After HIV was discovered and a screening test to detect antibody to the virus was developed and mandated for purposes of screening all blood donors in the U.S., the extent of HIV contamination of the blood supply was finally revealed. Contrary to the estimates of “one in a million” risk from the national blood banking organizations, nearly 1 in 700 units of blood donations in metropolitan areas in the U.S. were found to be infected with HIV at the time of licensure of the HIV antibody test in 1985. In San Francisco frequency was closer to 1 in 100. We estimate that the total number of transfusion-related HIV transmissions that occurred from 1983 to1985 was at least 10,000-20,000. It seems evident that most of these cases could have been avoided had our test been used.

Once information about the extent of AIDS in the blood supply became known, the public reacted angrily to what was perceived as a conspiracy to deceive. This anger was heightened when the public also learned about the refusal of other blood banks to use the test we had developed. Thereafter, under considerable pressure from congress, the FDA adopted an aggressive policy requiring all blood banks to rigorously test donated blood for a variety of potentially dangerous infectious agents. As a result, today more than 10 such tests are routinely used and the blood supply is safer than it has ever been. Are we proud of the test we developed and the decision we made to use it at Stanford, despite intense criticism from our blood banking colleagues? You bet!

1. More detailed information on our AIDS testing program can be found in: Galel, SA., Lifson, JD and Engleman, EG. Prevention of AIDS Transmission through screening of the blood supply. Annual Reviews of Immunology 13:201-27, 1995.

2. Although I led the effort to develop and apply our AIDS test, the program would not have been successful without the participation of Jeffrey Lifson, Dennis Sasaki, Claudia Benike and Susan Galel, who were members of my research group at the time, as well as the unwavering support of my faculty colleague, Carl Grumet, and the former Chairman of the Department of Pathology, David Korn.