Ask Stanford Med: Answers to your questions about seasonal influenza 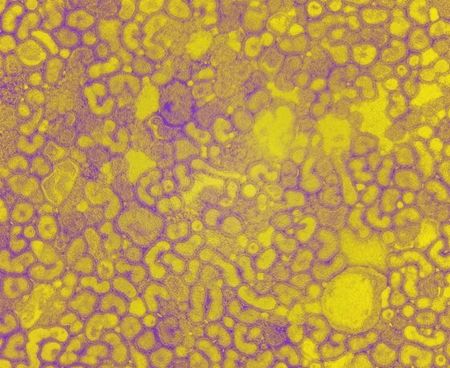 This article was adapted from material provided by the Stanford University School of Medicine. Click here to be taken to the original article.

The image above may look like a piece of abstract art, but it actually depicts influenza A. One of the three flu virus types responsible for the fatigue, fever and other symptoms that plague many of us from October to May, influenza A can infect people, birds and other animals.

While the 2011 influenza season was especially mild, that may not be the case this year. To help you and your family prepare for the flu season, we asked Corry Dekker, MD, medical director of the Stanford-Lucile Packard Children’s Hospital Vaccine Program, to respond to your questions about the flu and vaccine research.

In the following Q&A, she answers a selection of the questions submitted via the @SUMedicine Twitter feed and Scope, which range from the effectiveness of the flu shot to concerns related to vaccinating children.

Austin Peer asks: Approximately what percentage of patients receiving the injection still contract the virus? Additionally, what is the selection process for choosing which strains of the virus will be contained in the vaccine from year to year?

The definition of influenza vaccine effectiveness is complicated by many considerations, but the general answer is that it provides 70-90 percent protection overall. Among the factors that need to be kept in mind is that influenza vaccine composition is redefined every year. Some years this results in a vaccine with a good match to the viruses that circulate during flu season. However, during other years the vaccine is not so well matched against one or more of the three influenza strains chosen. Differences in match from year to year, the design of clinical studies and endpoints used to define effectiveness and in the populations tested also contribute to variation in the published rates of vaccine effectiveness.

Every year, viruses are chosen to represent influenza A/H3N2, A/H1N1 and influenza B for the upcoming year’s flu vaccine. Selection of the virus strains is made in late February by the World Health Organization (WHO) after detailed analysis of influenza viruses collected by more than 100 national centers during the prior year’s flu seasons. A prediction is made for the next season based on this analysis and availability of new candidate virus strains is confirmed. After the WHO makes their general recommendation, each country determines which exact virus strains will be used in their licensed vaccines. For the United States, the group deciding this is the federal Food and Drug Administration in consultation with their advisory committee of vaccine experts.

Dave P. asks: A recent article in the Scientific American reports there is a lack of scientific evidence that flu vaccines are effective for the elderly or very young. What is your perspective on this research?

I think the research confirms that while there is certainly room for improved influenza vaccines for individuals at the extremes of age and for those with some medical conditions associated with poor vaccine response, there is still value to getting immunized. Importantly, we can’t predict at the individual level who will be protected and who will still become sick from influenza infection. This was borne out in a study reported this week from Centers for Disease Control and Prevention that indicated that 43 percent of 817 children who died of influenza over the eight influenza seasons in the United States had no pre-disposing illness and the time from symptom onset to death was in fact shorter among children with no underlying high-risk conditions compared with children with at least one high-risk condition. This reinforces our current recommendation to vaccinate all children annually against influenza if older than 6 months of age, with very rare exceptions.

For the elderly, the only trial that compared vaccinated vs. unvaccinated individuals using a randomized, controlled design was done in the Netherlands during the 1991-1992 influenza season. Vaccine efficacy was 58 percent for preventing clinically-defined influenza with serologic confirmation of infection in this study. Because we now recommend that everyone get a flu shot, it is no longer possible to do such studies with unvaccinated controls. In the future, studies that use more specific endpoints of culture and/or PCR confirmation of infection will help refine effectiveness estimates across multiple influenza seasons. Although, the adequacy of vaccine strain match to circulating influenza strains will always complicate things.

Tobryant asks: Is there a vaccine for H3N2?

 B/Wisconsin/1/2010-like virus. This is from the B/Yamagata lineage of viruses, which is also a change from last year.

If a new circulating virus strain with pandemic potential is identified after manufacturers have already begun manufacture of the fall influenza vaccine, it is possible to make a matched pandemic vaccine as was done in 2009. Newer methods of vaccine manufacture will shorten the manufacturing timeline in the future.

MDB asks: I’ve read that getting a flu shot during pregnancy can lower the risk of babies being born prematurely or underweight, as well as boost their immunity. Can you further explain how getting a flu shot while pregnant can result in such added health benefits for newborns?

These results come from a randomized, controlled trial conducted in Bangladesh of influenza vaccine vs. pneumococcal vaccine given to pregnant women and a retrospective cohort analysis of a large surveillance dataset (the Georgia Pregnancy Risk Assessment Monitoring System) done by the same authors. In both studies, maternal influenza immunization was associated with higher birth weight and lower risk of premature birth  but only during periods when influenza virus was circulating in the community. This implies that the effect is from prevention of influenza infection in the mother, infection that itself is associated with premature labor and lower birth weight infants. The authors speculate that the vaccine effect may be mediated by preventing release of inflammatory cytokines associated with preterm labor and from stimulation of prostaglandins that provoke uterine contraction. The effect on birth weight was more prominent in the Bangladesh cohort and may also be explained by inflammatory mediators having an effect on maternal and infant metabolism. More work needs to be done to follow-up on these intriguing findings.

Eileen asks: Does the flu shot pose any specific risks for children with autoimmune disorders or diseases? Also, is a preservative-free shot available?

It’s important that children with autoimmune disorders get immunized annually against influenza because they may be at higher risk of getting serious complications of influenza disease. Children with the following chronic health problems are at high risk; for most diseases on this list, the recommendation is to get the “flu shot” rather than the nasal spray version of vaccine that contains live but weakened virus, so you should check with your doctor:

 Endocrine disorders (such as diabetes mellitus)

 Weakened immune system due to disease or medication (such as people with HIV or AIDS, or cancer, or those on chronic steroids), and

Preservative-free influenza vaccines are available as single-dose injections so just ask your provider if you have a concern. The nasal spray vaccine does not contain preservative.

It is important for your husband to get the flu vaccine to maximize protection for your son and, of course, also himself. Remember that the first time a child gets the flu vaccine it takes 2 doses a month apart to fully immunize. Children and adults with heart disease are in one of the high-risk groups for influenza complications; more information about children and influenza can be found on the Centers for Disease Control and Prevention website.

Depending on his age, your husband probably has the choice of three vaccine formulations: the traditional flu shot, the nasal spray vaccine or the new microneedle flu shot, Fluzone Intradermal, which is given into the skin rather than muscle. It may be helpful for him to review symptoms of influenza disease, which is much more likely to cause him to miss work than the vaccine.

Answers to questions submitted as part of this feature is meant to offer medical information, not medical advice. These answers are not a basis for any action or inaction, and they’re also not meant to replace the evaluation and determination of your doctor, who will address your specific medical needs and can make a diagnosis and give you the appropriate care.