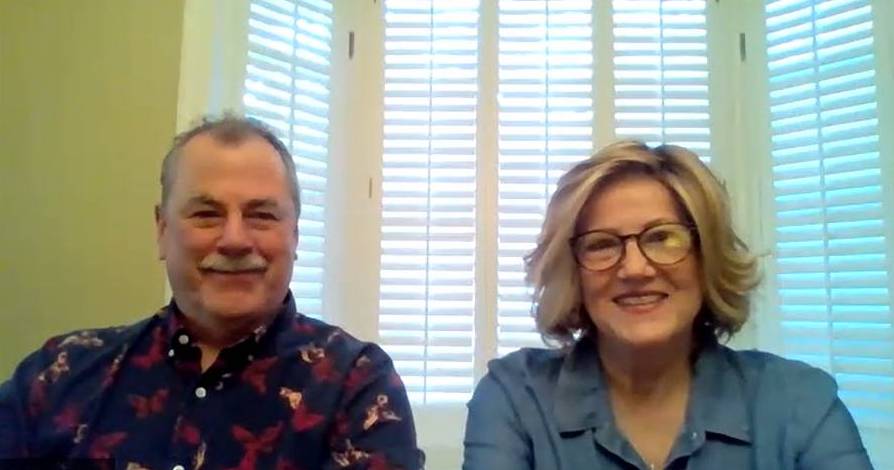 Ben and Gail’s Story: Giving Together

Last year, donor Ben Brian hit an incredible milestone with SBC: his 500th donation. When asked what motivates him to give blood, among the usual answer of service to others and the free cookies, Ben mentioned that he has been consistently motivated by the dedication of his wife, Gail. Gail is also a milestone donor, having given blood with SBC over 370 times, and Ben reported that the two have often had their own “donation dates” so they could give back together. In honor of Valentine’s Day this year, we wanted to highlight this incredible couple and the countless lives they’ve touched through their service together, both by donating blood and, more recently, supporting children in foster care.

Ben and Gail first met in college at Arizona State University (ASU) when their mutual friend set them up on a blind date. “At the time, I was a theater major, and when my friend said, ‘I want you to meet this engineer,’ I thought pocket protector and dweeby taped glasses. And when he heard I was a theater major, I think he was expecting someone a little goth,” Gail said.

“When I opened the door on our date, we were both pleasantly surprised, our expectations had been set so low!” she laughed. Both Ben and Gail said that they both “knew” they had met their match within that first week, and from that point on it was like “a date that never ended.”

By the time Ben and Gail met, Ben was a seasoned blood donor. “My dad wore his gallon pins when I was a kid and my mom worked the drives, so, from a young age, I knew about donation,” Ben said. “I’m pretty sure I first donated in high school and I definitely donated in college before Gail and I met. I was even doing blood work as part of my research at ASU, so I knew about the need for research, too.”* 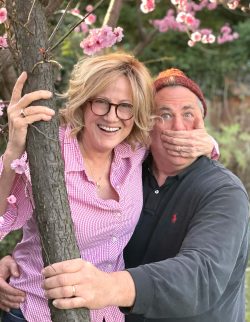 When asked how she began her blood donation journey, Gail joked, “Well, I knew he was sneaking out every Saturday morning. I tracked him down and found out it wasn’t his ‘other girlfriend’ — it was the blood center!” Though Gail had been terrified of needles from a very young age, she said that going with Ben made the whole process easier than she had expected.

“When we started going together, it was like a date,” Ben said. The two didn’t have access to cable television at the time, so it was a special treat to be able to go to the blood center and watch movies shown on the blood center screens together while they donated. “Yes, just like a spa day,” Gail added with a laugh.

Over time, the two have come to see the Stanford Blood Center team as “family.” Gail described their donations as “like hanging out with your buddies on a Saturday.”

Now, with 36 years of marriage under their belt, they still find something special in their “movie dates” at SBC. “We really love donating together because it adds something when you can look across the room or next to you,” Ben said.

In addition to their service at the Blood Center, Ben and Gail have also found ways to give back to their community as foster parents. According to Gail, from a young age, she pictured herself growing up to be a foster mom without any husband or biological children. And while she is thrilled at the way her life turned out, having raised three wonderful children with Ben, she still had a longing to be a foster parent. “I just wanted to create a home where kids feel welcome,” she said.

When she and Ben expanded their home to add additional rooms a few years ago and were truly settled in, they knew it was the right time. “The minute we had enough room for a new child, we filled out our paperwork, went to our classes, and within the first week we had our first sibling set of three: a three-month-old, a two-year-old and an eight-year-old.”

The couple noted that there is a high need for foster parents in the area, especially for homes that can take multiple children at once so as to avoid separating siblings. “Splitting up siblings is heartbreaking,” Gail said. Though fostering multiple children at a time is definitely more work, being able to do so is of particular importance for the couple. “It’s traumatic enough to be in care, but to lose a sibling who has your connection, who knows you and knows what you need to make you feel safe — it’s really important to keep those children together,” she added.

After close to four years now in the program, Ben and Gail have fostered 11 children together, with several sibling groups in the mix.

When asked what has inspired them to dedicate so much of themselves to serving their community, Gail said, “For me, it’s an internal motivator. I’m not the most brilliant person in the world — I don’t come close to scratching the surface with what other people can do with their minds —but I can make myself useful. This is one way I can really give back and serve people who need it.”

For Ben, he attributes much of his service to his upbringing. “I try to emulate my parents. They did everything in the community,” he said. He also added that, in terms of blood donation, he really appreciates the way SBC weaves in the recipient stories and information on whom he could be impacting.

“When you hear the story of these patients, it tears you apart thinking of everything they’ve gone through. Someone’s fighting for their life in the hospital and all I’m doing is spending a couple of hours on my back watching a movie. It really pales in comparison,” Gail humbly added.

And of course, having each other through it all is a huge source of inspiration. Sharing about their partnership in service, Ben said, “It’s really amazing to me that Gail is coming up on her 400th donation. If you saw my arm veins, you’d see I could stick myself,” he joked. “It’s easy for me, and I don’t even feel it. But to see her veins and to have the fear of needles she has, that’s a huge number and I’m really proud of her.”

ADVICE FOR GETTING INVOLVED

While both Ben and Gail have been deeply committed to and passionate about their service for a long time, they had to start somewhere. When asked their advice for others who may be interested in giving back but who may not know where to start, Ben suggested looking at your city’s web page and browsing the web for any opportunities that speak to you.

Then, when you find something you want to try, the key is not to get intimidated. If you start by looking at “the big picture,” Gail noted, it can seem overwhelming, and it’s easy to focus on the “what ifs” of everything that could go wrong. To help you move forward, the best thing to do is to just take the first step.

“I break things down into small steps, especially for our kiddos, and always start with the very first thing you can do, be that picking up the phone or getting online to check out the website. Then the next little step, you deal with it when it comes,” Gail said. “If you call the organization and they say, ‘Why don’t you come in on Saturday?’ then go in on Saturday, just check things out, and try to focus on one thing at a time.”

Then, once you’ve gotten your feet wet, that’s the time to look at the “bigger picture” that you’ll come to rely on for reinforcement. For Ben and Gail, an example of this has been the moving patient stories they’ve heard over the years. “When I think about donation,” Gail said, “it’s the image of a child that’s sick and a mom sitting next to his bed wondering, ‘Is my child going to get better?’ or a husband sitting next to his wife and wondering, ‘Is my wife going to get better?’ It’s knowing you were part of someone’s recovery and knowing that you had a hand in answering the wish of someone whose dream is just to see their loved one get better.”

Regardless of how you volunteer, Ben said most people can agree that those who serve “get more out of what they’re doing than they feel that they’re giving.”

Gail said, “It’s like building a cathedral brick by brick. You’re helping to build something that is so much bigger than you.”

It’s rare enough to find just one person as committed to serving others as Ben and Gail, let alone two. We at Stanford Blood Center are so proud and thankful to have such an amazing couple donate so much of their time to helping patients. After 36 years of marriage, 11 foster children and a combined 888 donations, they continue to motivate each other, they’ve motivated us and, hopefully, they’ve given you a little extra motivation today, too!

*Fun fact: Ben later worked at the company that first created the Trima machine (the machine we currently use to collect platelets) and he became one of the earliest donors on them as a result!