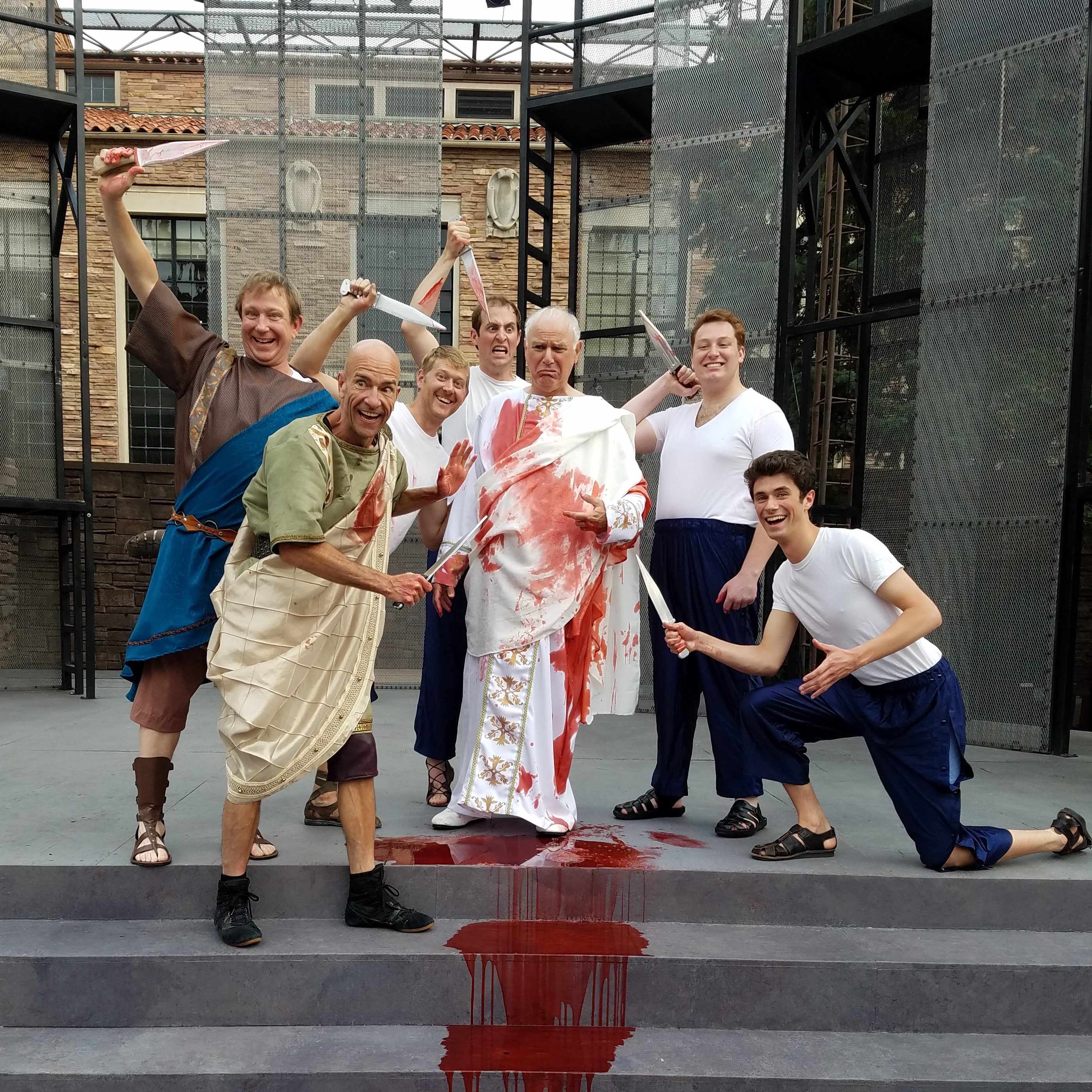 In honor of this week’s Blood in Pop Culture challenge, “blood x theater,” SBC sat down with classically trained actor and Bay Area native Robert Sicular to ask about his experience with blood and acting. Since the age of three, Robert has been developing his rich acting portfolio by performing at many venues throughout the United States, including TheatreWorks Silicon Valley, the San Jose Stage Company, the Berkeley Repertory, the Denver Center Theatre Company and the Seattle Repertory, to name a few. He has a great deal of experience performing for Shakespeare festivals in particular, including those held in San Francisco, Berkeley, Santa Fe, Washington, D.C., and Ashland. You can read more about Robert’s outstanding work at robertsicular.com/biography.

Q: When you think about blood used in theater, what comes to mind?

A: Two things come to mind. First, I recently watched a performance of The Lieutenant of Inishmore, which is a play about Irish revolutionaries. The second act is extremely bloody, and for this performance, they required gallons of fake blood to make the stage truly awash in blood. To do this, they actually had a drain built into their stage so it made it easier to hose it all down after each performance!

Second is the play version of Dracula! I was Dr. Seward, and my dear Lucy was very ill and two small puncture wounds kept appearing on her neck and we had no idea why… To save her, we had to give her a transfusion. They didn’t know much about transfusion and different blood types back then in the 1890s, so it was pretty hit or miss whether the person receiving the transfusion would die. There was a great line in that play taken right from the book: “No man knows till he experiences it, what it is like to feel his own life-blood drawn away into the woman he loves.” I still can’t decide if it’s romantic or creepy!

Q: You have a lot of experience with performing Shakespeare. Are there any images of blood that come to mind when you think of his plays?

A: Quite a few! Obviously the most common association is with Macbeth, which has a lot of blood imagery. It’s actually pretty interesting because in the early part of Macbeth, the people are all talking about how great war is and how they enjoy committing these violent acts, but when the king is murdered, they comment how there’s so much blood and it’s so horrible to look at, even though they’re warriors. You obviously also have the bloody dagger imagery, bloody hands… Even the witches reference blood in their ritual: “Double, double toil and trouble, Fire burn and cauldron bubble. Cool it with a baboon’s blood…” In the film version directed by Roman Polanski, the witches dip a goblet into the cauldron with baboon’s blood and Macbeth drinks from it!

In Julius Caesar, too, you have Calpurnia’s dream that foreshadows the war that is to come, and she talks about clouds that “drizzled blood on the capitol,” and a fountain with “100 spouts [that] did run pure blood,” which she interprets as a bad omen but Decius Brutus says is “all amiss interpreted,” that it actually means good fortune. And then when Caesar is killed, all the men wash their hands in his blood!

Q: In terms of performing, what are the challenges of working with blood in live theater?

A: Nowadays, most directors and costumers hate working with it. You always have to be really careful getting off stage not to touch things and transfer the fake blood. Plus, when you do the same show night after night, you need to reuse the costumes, but it can be really hard to get the blood out of your clothes. Of course, there are always exceptions. From the late 19th century through the early 1960s, there was this popular theater in France called Grand Guignol. They were known for being outrageous and extremely violent and gory. In fact, it’s said that they didn’t count a show successful unless a certain number of audience members fainted!

Q: What has the blood you’ve worked with on stage typically been made of?

A: Usually it’s a pretty standard formula. Although, for one Shakespeare play I performed in in Colorado, Julius Caesar, we needed a lot of fake blood which, as I mentioned, is tough to get out of clothes. So, in this instance, they made the formula for the blood half laundry detergent, which helped with staining as well as created a nice viscosity. However, this was an outdoor stage, and in Colorado during the summer, it can rain. We’d have someone come hose off the stage during intermission to get the blood off, but some residual blood would be left behind, and if it started raining during the performance, we’d end up with pink suds all over the stage!

Robert as Caesar in Julius Caesar

Q: How do you get the blood to “appear” at the right moment when you’re acting?

A: In that production of Julius Caesar, I was playing Caesar, who is stabbed to death,and the director wanted to make it look really bloody, so I had blood packs — basically baggies full of fake blood — hidden under my costume, and when the other actors pretended to stab me, I would smush the bag and pop it underneath my clothes. To make the scene even gorier, on the stage where I was performing, there was a small hole in the deck, and so they had run a hose through that hole and were actually pumping blood onto the stage that way, unseen.

Q: Do you have any memorable stories associated with using fake blood while performing?

A: That same Julius Caesar performance I referenced took place on the University of Colorado campus. When I die at the end of one of the scenes, Antony, who was a really strong guy, deadlifts my body and carries me off and behind the stage. The problem is, where we were on the campus was in between a set of classroom buildings that, at the time, had no sinks, no running water, no showers. But I was covered in blood and had to get it off of me and my clothes for my later funerary scene. So, behind the stage, they had a kiddie pool full of water and I’d strip off my tunic and toga and throw it in to soak. Then they’d give me a bathrobe and I’d have to walk with my head down and fake blood still all over my body through the crowd on intermission a couple of hundred yards to the theater building, go up four floors and down a few hallways to get to the men’s locker room where I could rinse off an change clothes. Now, keep in mind, this was still an active campus. So, sometimes, the fourth floor would be hosting dance classes I would have to walk by. There were a few times when, on my way to the locker room, I’d go up to one of the dancers and say, “Excuse me, do you happen to have a Band-Aid?” They obviously didn’t know the blood I was drenched in was fake. I wouldn’t let them freak out for too long, but it was pretty funny — and that trick worked quite a few times!

Q: Performing can be dangerous and requires a lot of precision, especially with battle scenes. Do you have any experience with accidentally spilling real blood on stage?

A: I’ve performed injured and sick a lot, and I’ve seen others be seriously injured during performances as well. I broke bones while playing Hamlet once when I was really in character — I was telling Ophelia to get herself to a nunnery and she wouldn’t listen to me, so I punched the set and, consequently, fractured a bone in my hand. There was another time in King Lear when I was playing Edmund and broke a finger. I had to do all the rest of the scenes — sword-fighting included — with my opposite hand! The crazy thing is I looked like a barbarian, I had a huge Viking mustache and all kinds of stage makeup. I was quite a sight in the ER when they asked, “How did you hurt your finger?” and I had to respond with, “Sword fighting.” 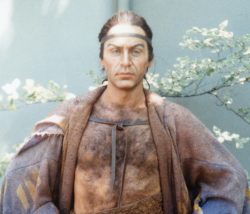 Robert as Hector, Prince of Troy, in Troilus and Cressida

The best blood anecdote I have, though, is when I was playing Hector in Troilus and Cressida. Since the play is about the Trojan War, our costumes were like a mix of Conan the Barbarian, The Road Warrior and Seven Samurai. To achieve this look, our armor was made in part from bamboo and in part from metal car parts. Well, there was this one fight scene where I had to fight Ajax, a warrior in the Greek army, and at one point during the fight, I accidentally brushed against his metal costume and took a big chunk out of my finger. At the end of that battle, I had to shake hands with all the Greek lords, and that scene went by really quickly because I was bleeding all over the stage. I ran offstage after the scene was over and all we had to stop the bleeding was a bright pink plastic Band-Aid. I tried to put stage makeup over it but the makeup refused to stick. So here I am for the rest of my scenes, the great hero of Troy, with a boo boo on his finger. It was pretty embarrassing.