In honor of National Best Friends Day this year, we interviewed two of our most dedicated SBC volunteers: Dan Rhoads and John Henry. Though their backgrounds are in some ways quite opposite (“yin and yang,” as they say), the two met and have formed a strong bond, largely through their joint commitment to blood donation and helping others.

Dan was the first of the pair to join SBC as a donor in October 2011, though he had already been donating and volunteering at another blood center for years. Back then, Dan worked at a major technology company, though he retired in 2011 and started volunteering with SBC shortly thereafter. While he continued donating often for many years, especially when he became a platelet donor in 2016, blood donation took on a whole new meaning for him in 2017.

That November, one of Dan’s dear friends, Ron Temple, was diagnosed with acute myeloid leukemia. The news came as a shock to everyone who knew and loved him, Dan included. Throughout his difficult treatment process, Ron was a regular recipient of blood transfusions since the chemotherapy would decimate his cell counts. “It blew me away to see how many pints of blood it takes to treat leukemia patients each week,” Dan said. “And when I looked at the hospital’s whiteboard list of names of patients in need of blood, Ron was just one of so many.”

Desperate to do more to help, Dan worked to create a blood drive in Ron’s honor in 2019 in the last six months he was given to live, but sadly Ron didn’t make it to see the blood drive realized. However, the drive was and still is held in Ron’s honor. Driven by his love for his friend as well as his commitment to helping others, Dan continues to coordinate drives, donate platelets and volunteer as much as possible.

John’s attraction to blood donation is equally personal. John starting donating blood when his father was diagnosed with leukemia, and he, too, saw the immense need there was for blood donations to support patients like his father.

He started donating even more frequently when one of his students at the local high school where he taught was diagnosed with cancer. To show their solidarity, John and two other teachers made a commitment to go donate blood together in her honor every time they were eligible. “We’d all go at the same time and drive over together, and still donate since we retired in 2000. Driving to the old Hillview center together was an especially great chance for us to talk about family, politics, gossip, anything… After over 100 visits, I thought they might start calling us ‘the three amigos,’” John said.

Unfortunately, shortly after reaching his 100th donation milestone, John became ineligible to donate anymore due to blood-thinning medication he began taking. “I tried to tell them to put a little blood thickener in my donation,” John joked. But while he couldn’t donate anymore, he could volunteer. And in fact, even 20 years later, as a volunteer, he still helps schedule his other two amigos when he’s working so they can continue to support patients together. 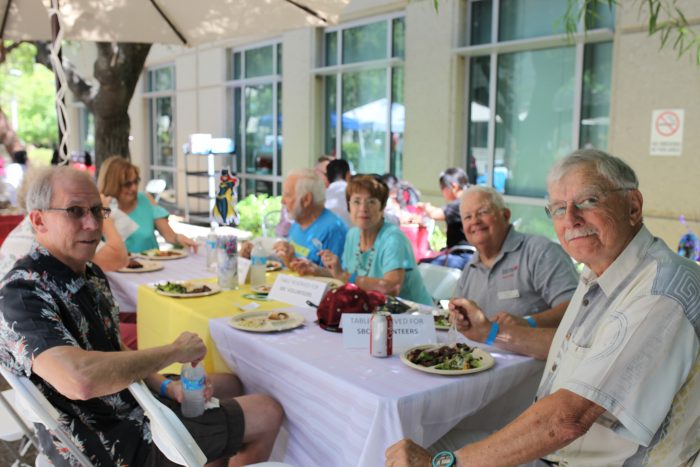 Dan had already been a volunteer for about five years when John first started. “Dan has a great memory. I, on the other hand, have what I call an Etch-A-Sketch memory,” John said. “When I first started, I’d hear someone’s name and turn my head and immediately it would be wiped from my memory, so I kept whispering to Dan, asking the names of our fellow SBC team members. Dan was so patient with me and helpful. Plus, he laughed at even my worst jokes.”

When asked his first impression of this man who kept asking him questions, Dan recalled, “There was something about John’s aura — maybe it was because he was a teacher. But I could tell that he really wanted to help, that he would stick around.”

And stick around he did. Now Dan has been volunteering about nine years, and John, five. Dan is one of the few volunteers at SBC who is qualified to do “label table,” labeling the tubes and bags needed to go on any given blood donation to categorize it properly for processing. Dan is very process driven and constantly looking for ways to make things run more efficiently. “Whenever I see him on a drive, he’s always jumping in to help out and inspires me to do more!” John said.

John’s specialty, on the other hand, is the canteen. “I used to be a pool manager at an elite country club. At night, I’d make sure the dining guests could look out on the pool area and enjoy the ambiance of umbrellas tucked in just right and the pool furniture and chairs perfectly placed.” John knows the importance of presentation in the canteen.

Despite their own specialties, however, what these two are most known for around the Blood Center and at various drive locations is the sense of community they build with others and the connections they forge everywhere they work. The two often coordinate their volunteer schedules and approach their work as a team.

“I always say John could get in a crowded elevator on the first floor, and by the time it got to the top floor, he’d know something about everyone,” Dan said. John humbly refuted this claim, but did say that he often finds, especially at large company blood drives, that many of the people donating don’t even know the person sitting next to them or what they do, so he likes to start conversations.

“I remember at one of these biotech companies I asked what this one donor did, and he told me that he worked on hamster ovaries. My mouth dropped open,” John said. With John’s teaching background, he’s always excited to learn something new; and with Dan’s tech background, he’s especially helpful at answering questions from John and the donors!

Both men confirmed, however, that the main reason they love the work they do at SBC is because it feels like “family.” Over the years, they have made countless friends through volunteering. They’ve shared stories, laughs, dinners and donuts. Both men have even donated personally to help team members and their families, providing anything from extra pottery equipment for a fellow artistic team member, to a truck-load full of furniture for one team member whose family home was burned down in a recent fire. Just in the past few weeks, Dan’s wife Carol even crocheted almost 100 bands for team members to support the required face masks needed during this pandemic. Simply put, they’re committed to helping anyone who needs support.

Though adamant that they are inspired by SBC team members and donors, it is safe to say that our SBC team members are constantly inspired by them as well. Rarely can you find an individual who is so selflessly devoted to others — and we at SBC have found two! We are so thankful for this dynamic duo, this central part of our SBC family. For their service, and for their friendship.