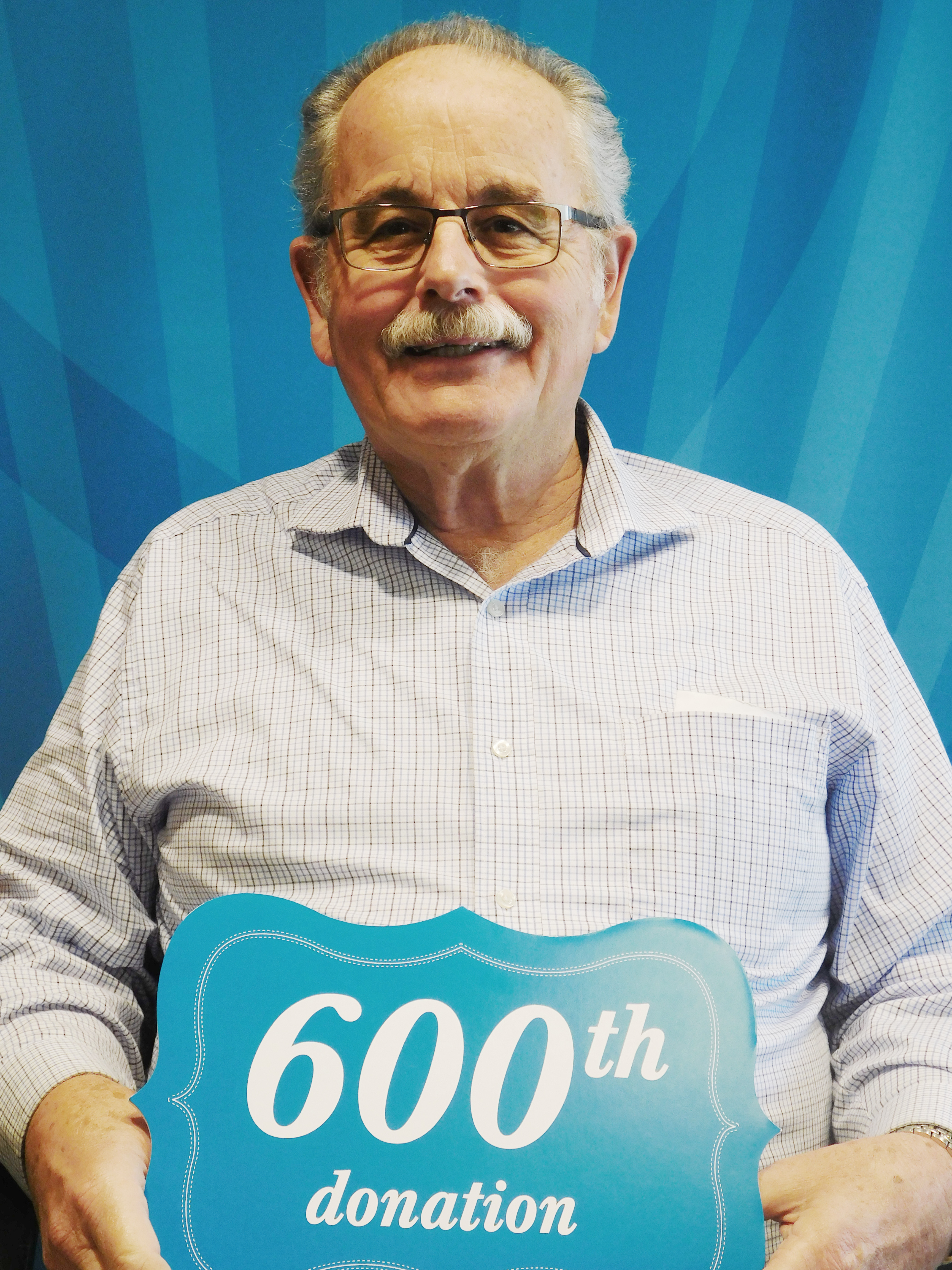 In late February, Belmont resident Fred van den Haak gave his 600th blood donation with Stanford Blood Center. Though currently in his 70s, Fred has been a dedicated blood donor and highly service-oriented since he was young.

“My first donation was a very interesting one,” Fred recalled. As a young man, he had enlisted in the U.S. Air Force and worked doing mechanical repairs on various aircrafts. He was stationed in both the Philippines and Vietnam. While serving at Clark Air Base in the Philippines, his typical routine consisted of working the swing shift (4:00 p.m. to midnight) and then grabbing a bite to eat and seeing a movie afterwards.

“On one of my earliest visits to the theater, the movie abruptly stopped in the middle and an officer walked in front of the screen saying there was a need for blood. They let us finish the movie, and then on our way out, everyone had to show their dog tags and we were all sorted into lines by blood type. Those of us with the type they needed were taken in a bus to the hospital and gave blood.” Fred recalled that this movie theater recruitment happened five or six times while he was serving in the military, and it was always a no-brainer for him to help. If there was a need, he was there to support.

After his military service, Fred applied the skills he had learned working on aircraft machinery at an electronics company in Palo Alto. His workplace happened to be neighbors with a blood donation center, where he regularly donated during his time at the company. However, after four years, Fred was looking for a career change. And as luck would have it, he had a connection at Stanford Health Care.

“When I first came to Stanford, there was a big learning curve because I had never worked in a hospital before,” Fred said. The biggest challenge was not the mechanics work itself, however, but adjusting to the emotional weight of what he was doing. In addition to designing and making devices used in radiation therapy, Fred would occasionally be called to repair odd related equipment, including a blood bank cesium irradiator.

“One thing that frequently brought tears to my eyes was being in Lucile Packard Children’s Hospital Stanford [LPCHS], seeing a bald kid, with both parents who had shaved their heads. That’s really something, to be that connected to your child.” Seeing both the pain — and love — these patients and their families experienced, Fred made a commitment to himself: “Whatever I can do, I’m really going to do it.”

Understanding the consequences of radiation and chemotherapy, Fred was aware that these treatments can often decimate a patient’s platelet count, requiring them to receive frequent transfusions as part of their treatment plan. At this point, Fred had become a regular donor at Stanford Blood Center, wanting to give blood to provide even more support for those same patients who benefitted from the machines he worked on and who continued to move him with compassion on a regular basis. When a nurse at SBC told him he would be a great candidate to donate platelets, he was thrilled.

Now able to donate up to 24 times per year as a platelet donor, Fred stayed true to his pledge of doing “whatever [he] could do.” Over the years, he came to center his schedule around his regular donation appointments, even avoiding deferral areas on international vacations. Fred also signed up to be a bone marrow donor and consistently did all he could to promote donation to others, using his post-donation bandage and SBC t-shirts as subtle conversation-starters out in the community.

After 39 years working at the hospital, Fred decided to retire. “When I started this job, I didn’t have any sort of medical background; I just knew how to make things. But on my last day, I walked through my department and looked around, and said to myself, ‘Gee, I made that, I made that, I made that…’ It was nice to see that a lot of the things I’d help make over the years were still being used and the patients were still benefitting.”

Fred may have retired from his job at the hospital, but he has not retired from helping patients. When asked what his 600th donation meant to him, he responded with a chuckle, “It only means that it’s the 600th. I’m hopeful to get to 700.” He said he knows that not everyone is able to give, and so he wants to do as much as he can to help meet patients’ needs.

As an extremely service-oriented individual, it is not surprising that his family is united in their commitment to helping others as well. Fred’s wife retired from the same hospital after 35 years working in radiation therapy, and both of their daughters have gone on to become blood donors, with the eldest working full-time as a pediatrician as well.

It’s safe to say that the number of lives Fred has touched both directly and indirectly through his dedication to patients is truly immeasurable. We are so grateful to have such a dedicated donor in our SBC family for over 600 donations now. Cheers to the next milestone!

To read the full spring 2020 edition of PULSE, visit stanfordbloodcenter.org/pulse.