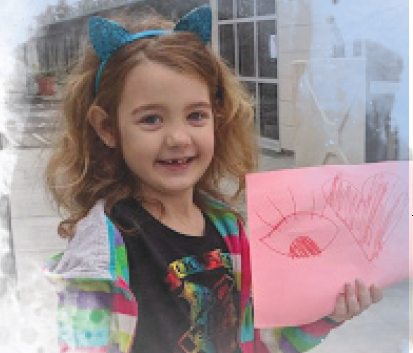 Hadley’s Story: A Six-Year-Old’s Fight Against Cancer During a Global Pandemic

It’s hard to believe that for the bulk of 2019, Katy Crain knew very little about cancer. She considered herself lucky to have never had any close family members affected by it, and while she was sympathetic to cancer patients and had donated blood before, the concept seemed removed from her everyday life. All of this is hard to believe because, today, Katy can talk in extensive detail about different types of leukemia, about the treatment required — she could guide you through a model of the main types of cells that blood is made of and describe how the body is attacked at the cellular level. While all of us have struggled in the past year to adapt to a “new normal” during the COVID-19 pandemic, for Katy and her family, the phrase “new normal” represents a much deeper struggle.

Katy and her partner Pam are mothers to two daughters, Makena, age 10, and Hadley, age 6. In fall of 2019, the whole family was looking forward to Hadley starting school. But shortly after Hadley started kindergarten, she began to complain that her legs were hurting, and her teacher and school staff began to note to the family that Hadley wasn’t running around on the playground with the other kids. Though at first Katy shrugged it off since Hadley was generally low energy, Hadley’s pain soon became constant and persistent.

“Hadley started limping,” Katy said. “The doctor was convinced it was growing pains, but it was getting worse, and quickly. There was one day we went to a birthday party and she actually started crying and asking for a wheelchair. I was crying, too — it was really stressful not knowing what was going on, and not knowing how to help.”

Insisting there was something beyond growing pains at play, Katy brought Hadley back to the doctor in September, where they did a blood draw and noted that, while everything appeared fairly normal, Hadley was a bit anemic and showed some signs of inflammation. A referral was put in for rheumatology, but the appointment wasn’t until January 2020.

In the meantime, the family tried to hold out, but Hadley kept getting worse. “I remember watching her on Halloween. She had been so excited to dress up in her cheetah costume — Hadley loves everything about cats. But she struggled trick-or-treating. It was heartbreaking seeing how she couldn’t run and keep up with the other kids. Eventually she refused to walk at all, and we had to put her in a stroller and wheel her all the way up to the door to get candy,” Katy recalled.

All this time, Hadley continued to limit her activity at school, missing out on valuable playtime with her peers and even the school’s walk-a-thon (though she powered through and completed four laps around the field). Then on November 13, Katy got a phone call from Hadley’s principal. “They told me that Hadley fell at lunch and that she was okay but is crying in the office. I rushed down to the school and saw that she couldn’t put any weight on her foot. All she could say was, ‘Mommy, it feels puffy, it feels puffy.’” They clearly could not wait any longer to get help. Katy took Hadley from school that day and went straight to the emergency room.

After the examination and multiple blood draws — a process that was very traumatic for Hadley who, having had her blood drawn after her first doctor’s visit, knew the pain involved — Hadley, Katy and Pam were left to wait in the ER. They heard doctors and nurses floating the word “oncology” around but had no real idea what was going on, just an overwhelming sense of dread and fear for what was to come.

It wasn’t until midnight that a doctor came into the room. “When she walked in, she asked if we knew what was going on. It kind of reminds me of when you get pulled over and the police officer asks you if you know why, and you don’t know what to say, and you’re just anxious… She told us, ‘We believe Hadley has leukemia,’ and we were floored. Not much from that moment is a clear memory,” Katy said. The few things she does remember are telling the doctor that her job of telling moms their children had cancer must be incredibly difficult; and being aware that she was “‘the mom sobbing in an ER hallway’ that others must be feeling sorry for.”

Over the next few days, Hadley had a biopsy and additional testing that confirmed she had acute lymphoblastic leukemia, a blood cancer with a great prognosis but with a two-and-a-half-year treatment plan. “We knew we would be fighting this for a long time,” Katy said. She already has the date marked on her calendar when treatment will end: June 24, 2022.

From the moment of diagnosis, everything happened very quickly. Hadley began chemotherapy and lost her hair, there were more hospital stays, more clinical visits. “You never know how much it will take, how intense it is,” Katy reflected. “Every night, Hadley takes a chemo pill, and every week she gets a different type of chemo at the infusion center, and she has had 10 lumbar puncture procedures under general anesthesia where they inject chemo into her spinal fluid. We show up every Friday to the hospital, and it is a day-long process that starts when they use a needle to access the port put in her chest and draw blood. Then they tell us if her blood counts are safe enough for chemo, if she needs to wait or if she needs a transfusion.”

As of fall 2020, Hadley has had 12 blood transfusions. “I remember the first time seeing that bag — it’s the same little bag that they collect during donation. As I watched the blood traveling down the tube from the bag and into Hadley, it was very surreal thinking how someone had been sitting in a chair just like this with a needle in their arm donating, and now we were here on the receiving end.” Though bags of donated blood are stripped of their donors’ information, Katy always sneaks a peek to try to glean any information she can, in the hopes that the person who donated knows how grateful she and her family are.

Aside from the treatment itself, one of the hardest parts has been explaining it all to Hadley — why she has to take medicine that makes her sick, why she can’t go to school, why she feels like “the only six-year-old in the world who has this.” Even explaining to Hadley’s sister, Makena, why Hadley acts upset when she has to take steroids and why she has to spend more time with relatives during Hadley’s hospital visits has been extremely trying for them all.

Then, as if adjusting to their new reality weren’t difficult enough, COVID-19 hit its first peak just before Hadley was given clearance to go back to school and spend time with her friends. “We weren’t yet over the trauma of hearing Hadley had cancer when the pandemic happened,” Katy said. All that time spent looking forward to returning to school and seeing friends, to “normal,” was for naught. Even the trip planned for Hadley’s “Make-a-Wish” had been canceled, something Hadley still hasn’t come to terms with. Hadley isn’t the only one who feels the pain of the pandemic, either. “They say it takes a village to raise a child,” Katy said. “We have a fantastic community, and they are helping all they can, but now it’s palpable how much we are lacking those villages.”

Though they can’t share meals or watch the kids, the one thing Hadley’s village has done to show their support is donate blood. “When Hadley was first diagnosed, I had coworkers from New York to Texas wearing cat ears — they have sort of become Hadley’s symbol — and sending me pictures of them giving blood. They even featured Hadley at her sister’s school, too, when there was a blood drive,” Katy said.

Now whenever people ask what they can do to help, Katy tells them about the importance of blood donation. “Even if it doesn’t go to Hadley, I know there’s a parent on the other side of that who is so thankful,” Katy said.

So, while Katy adjusts to her own new normal — giving Hadley a nightly chemo pill, hearing Hadley reminder her to bring numbing cream in the car any time they go out in expectation of a hospital visit, knowing way more about cancer (and teaching her kindergartner way more about cancer) than she could have ever imagined — she is hopeful that, by telling her story, she and Hadley can help save lives in the process.