Join Us in Celebrating a Community Hero at the Last Paul B. Newman Drive 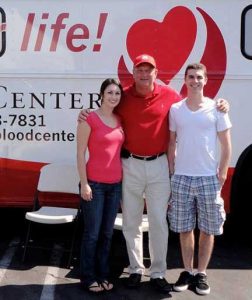 Paul Newman with his children

It was a close call for Paul and his then 11-year-old son Mitch more than 10 years ago when they were in a serious accident on the freeway.  Paul and Mitch were in Paul’s truck driving down Highway 85 when another vehicle, driving at over 100 mph, swerved into their lane and sideswiped the truck, which then rolled over several times.  Paul and Mitch were lucky; they did not sustain any serious injuries but this experience served as a call to action for Paul, who recognized that some aren’t so lucky.

A couple of months after the accident, Paul and Mitch paid a visit to the paramedics who helped them at the accident site. Paul wanted to personally deliver his sincere thanks and also wanted to know what he could do to give back to the community, like the paramedics do every day.  Their answer: give blood as much as you can. Paul not only decided to become a regular donor but also took his commitment a step further and began to hosting community blood drives.

It has been 11 years since that first Paul B. Newman community drive.  Paul has since held two community blood drives per year and has collected thousands of units of blood. While Paul has decided it is time to retire as the coordinator of these drives, he hopes that someone will take the reigns and continue the amazing tradition he started all those years ago.

Paul’s last community blood drive will be held on Saturday, September 20 from 9 am – 3 pm at 1375 Blossom Hill R., San Jose, CA and he hopes it will be his biggest and best one yet! Stanford Blood Center would like to take a moment to extend a special thank you to Paul for the time and energy he has dedicated to giving the gift of life through blood donation.

If you would like to make an appointment to donate, either at the Paul B. Newman drive or at one of our center locations, visit our website or call 888-723-7831.