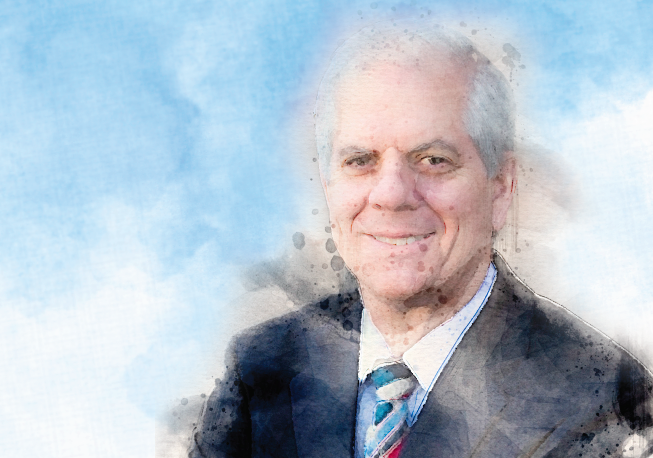 Dr. Edgar Engleman is the founding Medical Director of Stanford Blood Center (SBC), as well as Professor of Pathology and Medicine at Stanford University. Over the course of his career, Dr. Engleman’s passion for supporting patients has fueled accomplishments that have radically transformed the blood industry and patient care. In particular, his unrivaled understanding of the immune system enabled him and his team to produce the first AIDS virus blood screening test in 1983, to create a technology that became the basis of the first immunotherapy for cancer to be approved by the FDA in 2010, and to contribute to research that has significantly improved outcomes for transplant patients.

Having been with SBC since its inception in 1978, Dr. Engleman’s perspective on where we are today, and especially where we have been this past year, is informed by a rich history of challenges and innovative problem-solving. To help us better understand how far we’ve come and, in doing so, what that can teach us about patient care in the age of COVID-19, Dr. Engleman unpacks innovations in immunology and transplantation, as well as the AIDS epidemic and how it compares to the COVID-19 pandemic for the Blood Center.

Though his accomplishments are many, Dr. Engleman has spent most of his career on cancer research, particularly focusing on channeling the immune system’s dendritic cells for treatment. “When I first started my research, the immune system was barely understood,” he said. “The notion that a patient’s immune system could be harnessed for treatment of the patient’s own cancerous tumors was a crazy idea that had been talked about here and there, but that no one could figure out how to make possible.”

It was in the early 1990s that Dr. Engleman first got to work isolating specialized immune cells (dendritic cells) of cancer patients and manipulating the cells so that they could produce a stronger anti-cancer immune response when transfused back into the patient. “Though the first success was with prostate cancer specifically, it represented a major step in the immunotherapy revolution,” he said.

Dr. Engleman’s approach, pioneered in his lab at the Blood Center, became the basis of the Provenge vaccine for prostate cancer, the first FDA-approved immunotherapy for cancer. Over the years, immunotherapy has proven to be successful for other types of cancer as well and, in the past decade, medicine has even advanced to be able to treat cases in which cancer has already metastasized, something unheard of when Dr. Engleman was starting out.

“We still have a long way to go, though,” said Dr. Engleman, whose dedication to teaching the medical leaders of tomorrow has proven lifesaving. “Twenty years ago, I developed the first course at Stanford to teach about harnessing the immune system to fight cancer, and it’s very satisfying to see what has happened over the years as a result of all of this research, of the scientific community coming together to build on what we and others have discovered to continue making strides for cancer patients.”

Dr. Engleman attributes much of his own success to the Blood Center, which, from the early days of cancer immunotherapy research, provided key blood products and facilitated the transfusion of this first therapy into cancer patients. “Our success is a tribute to the fact that, under the same roof, we have so many people who work together with great synergy because of their goodwill and drive to help patients,” he said.

In working with the Flow Cytometry Lab at SBC, Dr. Engleman and his collaborators have been able to make strides in “reprogramming dendritic cells to come up with ways to make it possible for transplant recipients to not reject the transplant.” While in his cancer research the goal is to enhance the immune response, in transplant research, the goal is to tame the immune system so that it doesn’t attack the newly transplanted organs.

“Around the time the Blood Center opened, we didn’t have great ways to tell if donors and recipients would be genetically compatible, and so patients who received transplants were put on very potent immunosuppressant drugs, which was very taxing for them.” Now, thanks to innovations in immune response research, care teams can rely on “typing” — performed by such labs as SBC’s own Histocompatibility and Immunogenetics Laboratory — to look at blood samples and see how antibodies of the recipient react to the foreign organ. This work of transitioning early research into a clinical application was largely pioneered at SBC by Dr. Carl Gumet and has been constantly improving. As a result, our ability to assess transplant compatibility has skyrocketed, and the chance of organ rejection, as well as the amount of heavy immunosuppressant drugs needed by patients receiving transplants, has significantly decreased.

As with cancer research, however, much is still to be done. “Despite all the strides we have made, organs still only tend to last 10 to 15 years on average after they are transplanted, because the patients’ immune systems reject them,” said Dr. Engleman. “As we continue to learn more about how the immune system is regulated, we will be able to make organs last much longer, and even help alleviate organ donation shortages by manipulating the immune system to more readily accept organs, including those that are not HLA matched.”

Dr. Engleman’s investigation into the immune response and HIV was never in his initial plans, but rather was the result of quick pivoting to address a critical need during a crisis. The AIDS epidemic was a scary time because, for years, public health officials, medical researchers and the general public knew there was a problem but were unable to identify a solution.

“It became clear fairly quickly how the infection was transmitted, but the infectious agent wasn’t identified for nearly five years,” Dr. Engleman reflected. “We knew how to identify risk factors, but we didn’t know who really was infected, especially since the disease is very slow to develop and most people who were infected felt perfectly well for several years following their apparent infection.”

AIDS was also particularly frightening because it was known to be transmitted through bodily fluids, including blood. All blood centers could do during this time was try to limit donations based on known risk factors (such as IV drug use and common AIDS symptoms) and hope for more information on the causative agent. What was known is that years before people developed the symptoms of AIDS, their immune cells underwent dramatic changes, and Dr. Engleman’s test measured those changes. After the test was introduced in the early 1980s, it not only demonstrated how the blood supply could be made safe from AIDS, but also it ultimately led to a transformation of the standards of blood donor testing and of safety for the recipients of blood transfusion everywhere. The risk of HIV transmission through blood transfusion in the U.S. is now less than one in 1.5 million.

“I’ve never experienced anything like the COVID-19 pandemic,” said Dr. Engleman. In particular, he noted that the “extraordinarily infectious nature of COVID-19 and just how many people could have it without knowing it” has been unique and has changed the way we interact with one another in unprecedented ways.

One of the positive differences between these two crises, however, is the response of the scientific community. “There are some similarities with AIDS — especially with everyone being frightened — but you can see how far the science has advanced. It took us five years to identify the virus causing AIDS; it took us closer to five days to identify the virus causing COVID-19 (SARS-CoV-2).” Both the first blood screening for AIDS and the first blood antibody test for COVID-19 were developed at Stanford.

Now,* medical researchers at Stanford and beyond continue to use this knowledge of the virus and the immune response to the virus to find light at the end of the tunnel. “The challenge of developing a COVID vaccine is, in the end, an immunology challenge,” said Dr. Engleman, “the hope that the vaccine will sensitize our immune system to SARS-CoV-2 so that, if and when we are exposed to the virus, our immune system can attack and neutralize it before the virus can get established in our tissues.”

As someone who has built his career around studying and harnessing the immune system for public good, Dr. Engleman knows the power of immunotherapy and vaccine-based prevention. “I know a vaccine will work,” he said. “It’s just a question of when and how well.”

SBC continues to support the scientific community in its fight against COVID-19 by providing blood products to COVID-19 researchers in many labs at Stanford and here at the Blood Center, including research being performed in SBC’s Flow Cytometry Lab, and providing COVID-19 convalescent plasma to boost the immune response of patients currently fighting COVID-19.

Despite the current state of affairs, Dr. Engleman remains hopeful, dedicated as ever to the power of medicine and medical research, which he has seen transform public health and save lives, time and time again.

“Though we continue to wade through uncharted territory, it is very exciting to witness and be directly involved in discoveries that are improving the lives of patients,” he said. “Ultimately, all this work that our group and others in the medical community at large have been doing and continue to do is enabling patients to live longer and happier lives — which is why I’m still doing it.”

*Note that this article was written in November 2020 to enable timely printing for the winter 2021 edition of PULSE.