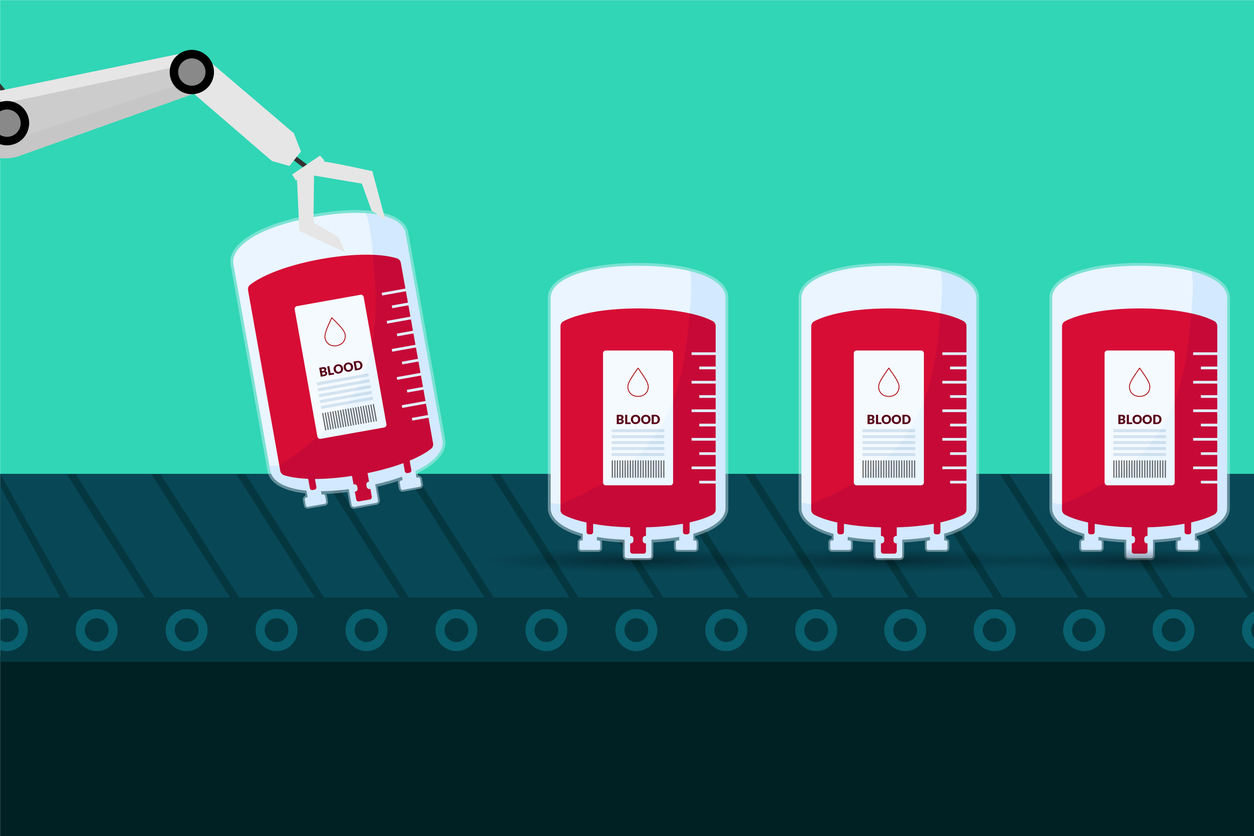 As amazing and lifesaving as blood is, it’s not a perfect product. First, there’s the issue of shelf-life: Red blood cells can usually only be stored for up to 42 days, after which they should no longer be transfused to patients due to decreased efficacy. Then there’s the issue of needing the right blood type, which may or may not be readily available. And, of course, the biggest issue, blood supply — i.e., whether or not any blood is available at all.

For months now, you’ve likely heard blood centers around the U.S. describing a “blood shortage.” Roughly one in seven hospital patients needs blood, which equates to about 30,000 red cell units needed in the U.S. each day. It’s a tall order to fill, and finding enough volunteer donors to meet that need has been and continues to be a real challenge. That’s why, for many years, researchers have salivated over the possibility of creating artificial blood, or “blood substitutes.”

A blood substitute is valued primarily on its ability to transport oxygen throughout the body, though factors such as producibility and shelf-life are also important.

Even before real blood transfusions were popularized, doctors and researchers were interested in finding a substance to replace blood lost in their patients. According to the National Center for Biotechnology Information (NCBI), early attempts at finding substitutes were spurred by William Harvey’s discovery of circulation in 1616. Per NCBI, “In the years to follow, medical practitioners tried numerous substances such as beer, urine, milk, plant resins and sheep blood as a substitute for blood.”

In fact, milk was a big hit. It was first used as a treatment for Asiatic cholera because it was believed to increase production of white blood cells, which are necessary for building immunity. Transfusion of cow, goat and even human milk became particularly popular in the United States in the 1870s and 1880s, though its use eventually fell off when patients reported high incidence of reactions and other complications.

Another key development in the 1880s was something called “Ringer’s solution—a solution composed of sodium, potassium, and calcium salts,” according to NCBI. Early experiments in frogs showed that replacing blood with the solution could keep the frogs alive for a short period, which lent itself to human application. While it is now known that Ringer’s solution cannot replace blood, its ability to increase blood volume means it can and in fact is still used today for such a purpose when necessary.

The field of transfusion medicine moved leaps and bounds during wartime simply because, well, it had to. Soldiers needed more blood than ever before, and it needed to be transportable and available in large quantities. While no blood substitute was successfully created, during both wars, a big focus was on plasma since it was believed that transfusing plasma could preserve a soldier’s life after shock from blood loss. In the 1920s, for example, scientists developed a gum-saline solution that extended plasma, allowing doctors to transfuse less plasma units, though it had some seriously dangerous health effects and lost favor in the 1930s.

Flash forward about a century and, unfortunately, we’re still struggling to find a solution. We do have more insight, though (largely originating rom the 1980s), which has spurred additional studies and investigation.

Today, if a blood substitute were to be created, it is believed it would fall into one of the following categories: hemoglobin-based oxygen carrier (HBOC) or perfluorocarbon (PFC), according to the Pacific Heart, Lung and Blood Institute (PHLBI).

The molecules that allow red blood cells in whole blood to effectively transport oxygen are hemoglobin proteins. Per the American Chemical Society, “Scientists have tried developing chemically modified [real human] hemoglobin — which by itself is toxic — as a blood substitute but have found that it forms methemoglobin,” a product that ultimately harms the body’s existing cells. Modern attempts at using HBOCs revolve around finding ways to encapsulate hemoglobin so that it will carry oxygen without exposing hemoglobin or any other harmful substances directly into the blood.

One HBOC to take note of is Hemapure, which is structurally very similar to another HBOC, Oxyglobin, which has been approved since the 1990s for use in veterinary practices. According to an article recently published in Anesthesia & Analgesia journal, Hemapure is “purified bovine Hb [hemaglobin], chemically cross-linked for stability and formulated in a modified lactated Ringer’s solution [a variation on the Ringer’s solution invented in the 1880s].”

Hemapure is the most widely studied blood substitute in humans. While it is still being researched and has not yet received full FDA approval, it is currently approved for “compassionate use,” or situations when no other treatment options are available. This is often the case when a patient cannot accept blood transfusions for religious reasons, when doctors can’t find blood that matches close enough for the patient to receive safely, or in remote locations where blood cannot be secured in time.

Unlike HBOCs, PFCs are entirely synthetic, “derived from fluorine- and carbon-containing chemicals,” according to PHLBI. PFCs are particularly useful for “dissolving and absorbing oxygen in the lungs and then transporting oxygen throughout the body.” PFCs post a unique challenge, though, in that they do not mix with blood and therefore need to be added to another solution to be effective — which can cause additional side effects/reactions, depending on what they are mixed with.

While a number of PFCs have gone through trials, there is no clear “winner” when it comes to solving the blood substitute dilemma.

If you take anything away from this article, I’d recommend two key points. Firstly, that the search for blood substitutes has been ongoing for hundreds of years, and, while we are making serious gains, there is no clear solution. Which leads us to point two: Until we can create a blood substitute, real live blood donors are our only solution to meeting patient need.

Blood donation is such a unique part of patient care in that it truly requires more than a care team, more than lab staff, more than the latest and greatest inventions. All of those things, no matter how innovative, can do no good without the pure, simple generosity of a community of people who just want to help. Thank you to our blood donors for being those people.

Special thanks to Dr. Suchi Pandey, Chief Medical Officer, who lent her expertise for this article.