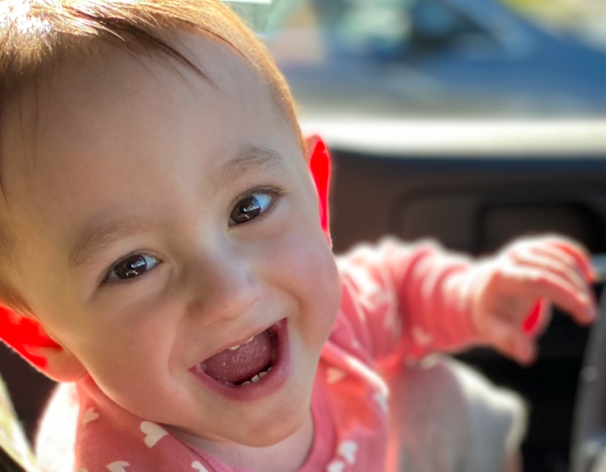 In early 2019, Kristi Trog and her husband Josh were thrilled but also surprised to find out that Kristi was pregnant with their first child. The pair counted this news as a true miracle. Though they knew that having a baby later in life would mean they needed to prepare themselves for a higher likelihood of complications, nothing could have prepared them for what would happen less than five months later.

That same year in July, Kristi was going about an otherwise normal day, but she knew that something “felt off” with her pregnancy. She thought it might be the result of a mild infection and went promptly to her doctor. While at the doctor’s office, Kristi and Josh were shocked to learn that, at just 23 weeks pregnant, Kristi was already going into labor.

“For four days, they tried everything they could to keep her in,” Kristi said. When a baby is that early, every extra day in the womb presents a better chance for survival and higher quality of life for the newborn. But finally, on the fifth day, her care team had no choice but to act. An ultrasound revealed that Kristi’s bag was coming down, and the umbilical cord was coming down with it. If that cord ruptured, she was told, her baby would not survive.

Doctors performed an emergency cesarian to save her child. “My baby was only 23 weeks. At 22 weeks, doctors don’t resuscitate. At 25 weeks, they are required to try to resuscitate. But for babies at 23 and 24 weeks, the parents have to make a choice,” Kristi said. At the same time that Kristi and Josh learned about this imminent life-or-death choice they needed to make, they had to process information from their care team as to all the possibilities of what could go wrong if their baby did come out alive. Twenty-three-weekers have a low survival rate — less than 50% — and, even if they do survive birth, often they have major health issues and may never be able to do things like walk and talk.

Despite their fear of what was to come, the parents knew that this was the time to fight for their child. “We told the doctors, ‘If there is a chance she will have any quality of life, do everything you can to save her.’”

Kristi was immediately moved to the OR and, when she woke up, there was Emiliana. She was what Lucile Packard Children’s Hospital Stanford (LPCHS) refers to as a “micro-preemie,” weighing one pound, and her eyes were still shut, but she had lived through the cesarian and was even breathing on her own. Emiliana was clearly a fighter, and, as the next several months would prove, she would need that spirit to get her through many harrowing circumstances.

Despite the joy at Emiliana’s birth and her relatively smooth delivery, she was kept on an oscillator for over a month and received help from breathing vents as well. Her eyes wouldn’t open until 17 days. Her skin was so thin, it was “like paper,” and she couldn’t be held. It wasn’t until Emiliana was 34 days old that Kristi could first carry her baby in her arms.

Then two weeks after she was born, Emiliana’s health took a frightening turn when doctors discovered she had developed a bowel issue that would necessitate immediate and risky surgery. Kristi and Josh found themselves, yet again, having to prepare for the worst. “They told us there were three possible outcomes: They could find the problem and be able to fix it; they could find the problem and not know how to fix it, which would be, in essence, a wait to see if she could live past this; or they could not be able to find the problem, which is about the same as finding it and not being able to fix it. On top of this, there was a possibility with all these options that Emiliana simply would not survive surgery, being as young and small as she was.”

Kristi describes that surgery as “the longest five hours of our lives.” Ultimately the doctors were able to find a surgical solution and determined that Emiliana would be able to eat with the assistance of a feeding tube which, given the circumstances, was a great outcome.

Their relief was short-lived, however, when shortly after the surgery, Kristi and Josh were told that Emiliana was developing a medical condition that would almost certainly make her go blind. Thankfully, the solution to this new issue was a very effective and safe shot that would most surely preserve her vision if administered right away.

Not all Emiliana’s medical emergencies, however, would prove to be as easily solved. “Every time we thought we were getting better, something would happen,” Kristi said. For more than six months after her birth, Emiliana fought through numerous critical incidents, including blood clots, an H1N1 diagnosis and a prion-scare. She also had low oxygen on multiple occasions and during her first three months relied on blood transfusions every day or every other day.

Kristi was extremely thankful for Emiliana’s diligent care team during this time, who not only took care of her daughter’s medical needs around the clock, but also offered invaluable emotional support and friendship to her and Josh during this challenging time. She is also thankful for the blood donors who allowed Emiliana to receive the care she needed for so long. “The people who donated blood, they saved our daughter’s life,” she said. “I’m so thankful to all of those people who unknowingly did that for our family. Because of them, we got to bring our little fighter home.”

Ultimately, Emiliana was in the hospital for exactly seven months, during which Kristi left her job and was living at the hospital and the Ronald McDonald house, with Josh continuing to work during the week to support the family and coming to the hospital to relieve Kristi on weekends. When Emiliana was finally stable enough to go home, Kristi and Josh were prepared for “any sort of equipment” and intense care regimens they would need to perform, though the only major medical device she needed was her feeding pump.

After so long in the hospital, the family was overwhelmingly relieved to go back to their own home. Kristi admitted, however, that the transition was not as smooth as might be expected. “On February 22, we were home a year,” Kristi said, “but I still have flashbacks, it’s still difficult. I didn’t realize at the time how comfortable I had gotten living in the hospital with people who understand our struggle. Now being in the outside world, we have an incredible support system, but no one else really gets it. There’s no way to describe what it’s like, to live for so long wondering constantly, ‘Is my baby going to die today?’”

Kristi said what got her through each setback was the hope that she could help someone else with her experience. “As parents, you have pictures of what a ‘normal pregnancy’ and ‘normal milestones’ will be. But life throws you curve balls,” she said. “The road less traveled is hard to navigate, and, as difficult as this experience has been, it’s so nice to be able to share and be there for others who are going through it, to let them know that they can get through it.”

This month, Emiliana is 20 months old. Incredibly, the health issues she is currently managing are relatively minimal and should not slow her down long-term. She has a chronic lung disease but is breathing just fine without the use of any ventilator system; she is near-sighted but otherwise has normal vision; she no longer has a feeding tube and is eating solid food; she is able to walk with help and is getting better each day; she is taking supplements, observing regular visits with medical specialists, and getting stronger all the time. “Her milestones are different. Most parents are celebrating a child walking much earlier: For us, it was a huge deal when she ate her first tablespoon of solid food around that same time,” Kristi said. “We still have a lot to celebrate and a lot to look forward to.”

As her mobility and other physical abilities have evolved, so, too, as her shining personality. “She has definitely found her voice. In the hospital, she had six full-time nurses and she often shared a room with another baby, so she’s used to being around people all the time and is very social,” Kristi said. She also described Emiliana as a little “engineer,” curious about everything and always wanting to know how things work. She spends her days around the house taking things apart to learn how they operate and fit together, playing with her beloved toy teapot and clapping, dancing and singing along to music.

Despite all the fear they had about losing Emiliana early on, now the couple can’t picture life without their precious girl. Their love for each other continues to carry them through the toughest of days and to encourage them to be the positive, inspiring and fiercely supportive individuals they are for each other and others in their community.