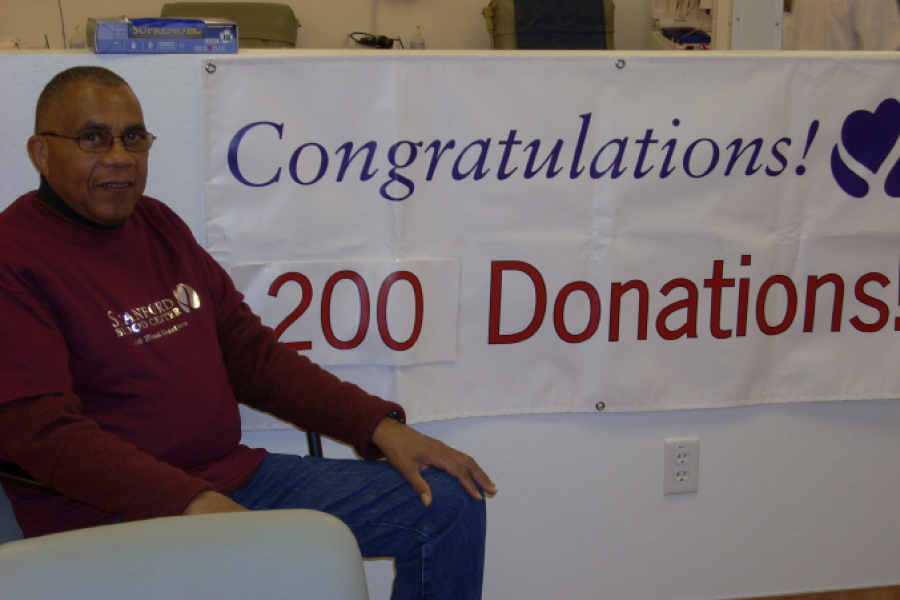 Ernest Boyd has been giving blood for decades. What started as a way to save the lives of others, however, has saved his own life multiple times.

Ernest first really committed to giving blood in the early 1990s. Though he had donated one or two times in the past, it never really stuck until one day he heard on the news about a truck driver in Oakland who was in a serious accident and in immediate need of blood. He had never met this individual but, as someone who firmly believes in supporting others wherever and however he can, “felt [he] had to go help.”

At his donation appointment at the county hospital, he saw a sign imploring individuals to register to give bone marrow. When he asked the folks at check-in how he could get involved, he was pointed to Stanford Blood Center, where he would first need to donate blood to perform some routine testing.

“At Stanford Blood Center, they educated me about the short shelf life and need for platelets — and I’ve never looked back since,” Ernest said. By 1997, he had already hit his 100th donation milestone.

As you might expect from such a committed individual, Ernest arranged his life around his donations — when to make plans, where to travel. To this day, Ernest donates blood on his birthday as his “present to myself,” as he puts it. But, over time, he was having to focus more and more on how to keep his iron levels up and implemented intense dietary regimens for himself before his donations. 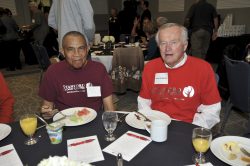 In 2016, the FDA raised the minimum hemoglobin level for males to 13 g/dL and, having already had issues keeping up with the lower minimum, Ernest knew this would be devastating to his ability to give blood. While most people in this situation would have given up, Ernest was determined to find a solution so that he could go on donating.

“The incentive for me to donate has always been high. I have to help the kids,” he said. “I just know some of those kids in the hospital will go on to do things that will make the world better, and it’s my job to help make sure they live long enough to do it.”

With supporting pediatric patients as his inspiration, Ernest consulted his own physician about the possibility of iron infusions. Though his doctor was hesitant at first, Ernest was persistent and eventually received a referral for the infusions, which were regularly administered in the hospital over the course of about an hour.

Ernest’s first infusion went relatively smoothly. However, during the course of his second infusion, he had a rare and unrelated reaction that led to a rapid decrease in blood pressure and heart rate, otherwise referred to as a “vasovagal syncope.” His blood pressure dropped so low, in fact, that his heart completely stopped beating for two minutes.

“If this had occurred anywhere else but inside a clinic at the hospital, it would have been game over,” he said. But, because he was there receiving a transfusion, his condition was immediately noticed by hospital staff. The emergency team scrambled, successfully resuscitated him and rushed him to the Emergency Department prior to transfer to ICU.

Not only was his life saved during that moment of transfusion, but, as a result of this near-death experience, his doctors ran a wide range of medical tests, one of which detected an entirely new issue that would have otherwise gone undetected: lung cancer.

“The lung cancer was addressed in 2019 with five doses of radiation coordinated and orchestrated by an extremely dedicated team of nurses, at least one physicist and radiation therapists; led by an awesome radiation oncologist. I had so much energy after that last dose that I was able to run up the 30 steps from the basement to the first floor of the Blake Wilbur Cancer Center!”

Though Ernest thankfully has remained cancer-free since his 2019 treatment, in mid-2020, he was again facing an increased rate of deferral, this time, due to chronically low heart rate, or “bradycardia.”

Ernest was determined not to waste any more appointment slots if he could help it and consulted with a cardiologist to request an exemption note, which was declined. “She said that it was, in fact, not safe for me to donate, and when she explained, it made sense. I had been diagnosed with coronary artery ectasia and that artery enlargement reduced the rate of blood flow to the nervous center that controls my heartbeat,” he recalled. “If the blood pressure going through that already improperly functioning artery dropped down too low — and blood pressure does lower during platelet donations — it could stop my heart.”

Though his doctor did not have a solution, Ernest was, of course, not to be discouraged. He had overcome low iron and cancer, and he was determined to get to a point when he could donate as reliably and as often as he wanted. It all came back to helping the kids.

After doing his own research and requesting additional tests, Ernest discovered that his calcium levels were very low. Though this may seem a random coincidence, further investigation and consultation with his doctors revealed that it was this very deficiency combined with the reduced rate of blood flow that caused the bradycardia.

If it wouldn’t have been for his insistence on supporting local patients, Ernest would not have pushed through to find a solution. He quickly began taking additional supplements and was healthier — and donating platelets again — within no time.

As of March 2021, Ernest is giving multiple units of platelets every few weeks and is only about a year away from his 300th donation milestone. Thanks to dietary changes, medical intervention and, most importantly, his unstoppable resolve to help others, Ernest reports, “I am both alive and much healthier than I would have been had I not been intent upon remaining a frequent platelet donor.”

And how did we at SBC learn about this incredible story? Would you believe that he, the man who would stop at nothing to donate blood at SBC, wrote in to thank us for providing the motivation to maintain good health. To Ernest, whose humility is only surpassed in greatness by the tremendous love he exhibits towards those in need, we are so thankful and inspired to have you as part of our SBC family. Words cannot express our gratitude for the countless lives you’ve saved — and continue to save — through your generosity.