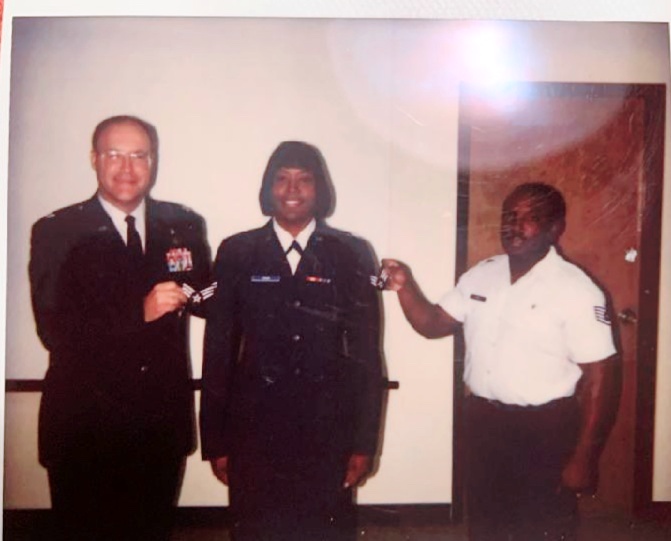 From Air Force to SBC: A Veteran’s Story of Service

When we talk about saving lives at SBC, it’s usually in the context of donating blood. However, service to others can take many forms, with one of the most impactful being military service. Next week is Veterans Day so, in the spirit of honoring those who serve, we are featuring Lakeycia Jefferson, Histocompatibility Specialist working in SBC’s  Histocompatibility & Immunogenetics Laboratory (HLA Lab). Thank you to Lakeycia, her father and all those who have served for their dedication to supporting others.

Q: When and why did you first enlist?

A: It was sort of destiny. For context, my father had attended college on an athletic basketball scholarship and was drafted for the Vietnam War shortly after. Around the time I enlisted, I was finishing my senior year of college where I’d also been offered an athletic and academic scholarship and was studying biology. I decided I wanted to travel and to follow in my father’s footsteps so I signed up for the Air Force in 1995 without my parents’ knowledge and they along with my grandparents were proud of the decision I made. 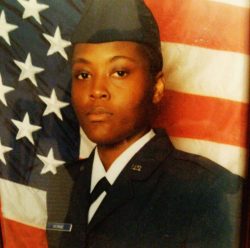 Q: What were you planning to do in the military? What was training like?

A: I signed on to be a clinical lab scientist, which requires a lot of specialized training in running clinical laboratory tests, phlebotomy, hematology, urinalysis, etc. First, though, you have to do basic training, or “bootcamp.” I can recall flying to San Antonio, Texas late one night from Tampa, Florida. The new recruits were loaded onto a long bus. You could tell we all were nervous. I was one of the taller females and certainly more mature because most of the females enlisted right out of high school. I had been forewarned by my recruiter that they generally choose the tallest person as the dorm chief. Sure enough, I was chosen that night as the dorm chief. I was horrified at the increased responsibility. But, by the end of my six weeks, I got to see my family at graduation. My mom told me I was a different person from when I left home. There was a transformation.  I was disciplined, sharp, focused.

From basic training, I was sent to Sheppard Air Force Base (AFB) in Wichita Falls, Texas for Phase I of my medical laboratory technologist training.  The training was in depth but a bit more relaxed.  After completion of Phase I, I was sent to Keesler AFB in Biloxi, Mississippi for my Phase II internship training in the clinical laboratory.

Q: Where did you serve on active duty?

A: My entire graduating class received orders to be stationed overseas, but I was so nervous about being far away from home that I swapped orders with another airman in the class graduating before me. As a result, I went to MacDill AFB in Tampa, Florida and he went to England. Boy, do I regret that one.

Eventually, though, I was chosen to be on the blood transshipment team and was sent on a short tour to Aviano AFB in Italy. We were trained to receive and distribute blood and blood products from Armed Services Whole Blood Laboratory (ASWBL) and set up a fully functional field laboratory to be utilized during times of conflict. The idea was that we would receive blood units from the states, process them and eventually distribute them to the field for troops that needed them in the Middle East. It was really rewarding work and I loved having the opportunity to tour around Italy in my off hours.

Q: What kept you motivated during your service?

A: During my four years of active duty and four years in the reserves, I always thought about the mission, the oath we took to defend the Constitution against all enemies, foreign and domestic. And I knew I was making a difference. Anyone who has ever served, once you hear the national anthem and you’re outside of the U.S., it takes on a whole different meaning, and there’s so much pride in being an American and being able to serve in that capacity. 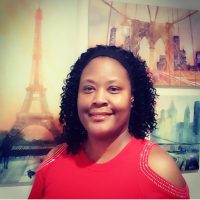 Q: What did you do after active duty?

A: Once I knew I would be leaving the military and going back to my life as a civilian, I took my military training and skills and landed a job at LifeSouth Community Blood Bank, where I was a medical laboratory technologist in the donor testing lab, making sure donated blood units were safe for transfusion.

I was actually employed at LifeSouth when the 9/11 attack happened and I was put on standby to return to active duty — my bag was prepared and I was ready to go at a moment’s notice. And while my reserve unit didn’t deploy, I got to serve my country in another meaningful way. At that time, we were working 12-hour shifts seven days a week to perform testing on all the blood that the community was donating. Americans were so eager to help that the government actually had to ask people to save their donations and space them out so we could help patients longer term, since the need for blood never stops. Watching all those people come in to give blood, it was such an amazing and patriotic experience. One I will never forget.

Q: What got you involved with transplant?

A: I had a friend from the blood center at the time who left to work in transplant, and they were insistent that I would love it. And they were right! Now, I’m an HLA tech at Stanford Blood Center. Most people don’t know what an HLA tech is, they never see what we do, but we do a lot. Our work allows people another chance at life, mainly by helping with transplant matching. Sometimes it’s tough, especially the late hours, but any time I feel like it’s too much for me and I can’t go on, I think about that person waiting to know if they can get their transplant, and I’m able to push forward. Getting to help extend the life of another person, it’s so rewarding.

Q: How did you/have you stayed connected to other veterans and service members?

A: In 2008, I had friends who were deployed in Afghanistan who sent back a request for spiritual support and care. When you’re faced with death every time you leave a base, it can really wear on your mental and spiritual health. So, I and others from my church formed a group of “prayer warriors” that grew all over the U.S. Secure phone lines that my team of prayer warriors manned were set up so that the troops could call for prayer and spiritual support for themselves and family members back here in the states. Large communities, even civilians, ended up getting involved. We think a lot about taking care of our troops’ physical needs, but they need spiritual care, too, so it meant a lot to be able to help provide that. 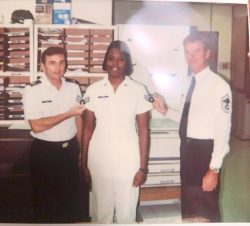 Around the same time, my niece had an idea to send Girl Scout cookies to the troops in Afghanistan. The girls were so excited for the “troop” to troop experience. We sent over 100 boxes of Girl Scout cookies to the soldiers and they were so appreciative. My niece’s involvement inspired us to find even more ways to show support. As you know, being away from your family during the holidays can impact your mental health and well-being — not to mention being in a war zone. So, for every holiday, we asked soldiers to send a list of items that they needed, and we’d send them care packages. Christmas is one example where we sent the needed items in decorated Christmas stockings. We were sent pictures of those stockings hanging on the doors of their sleeping quarters — they were really thankful and it helped lift their spirits.

Now, I’m still connected to service members – it’s a lifelong connection. When I first arrived here in Palo Alto, I would go over to the Palo Alto VA behind SBC to just sit and talk with other veterans, and I still do that around this time of year. More than anything, they really appreciate having someone to listen. I think a lot of times, when you’ve been through all these difficult things, not even just the fighting itself but the personal interactions and the mental experience of serving, too, they worry that their stories will be forgotten. I like to be able to lend an ear and build relationships with the community in that way.

Q: Why is service important to you?

A: Because, for me, it kills that spirit of selfishness within. There’s a certain joy and reward that comes from being able to help others, be that with anything from working or donating at a blood center, or military service.