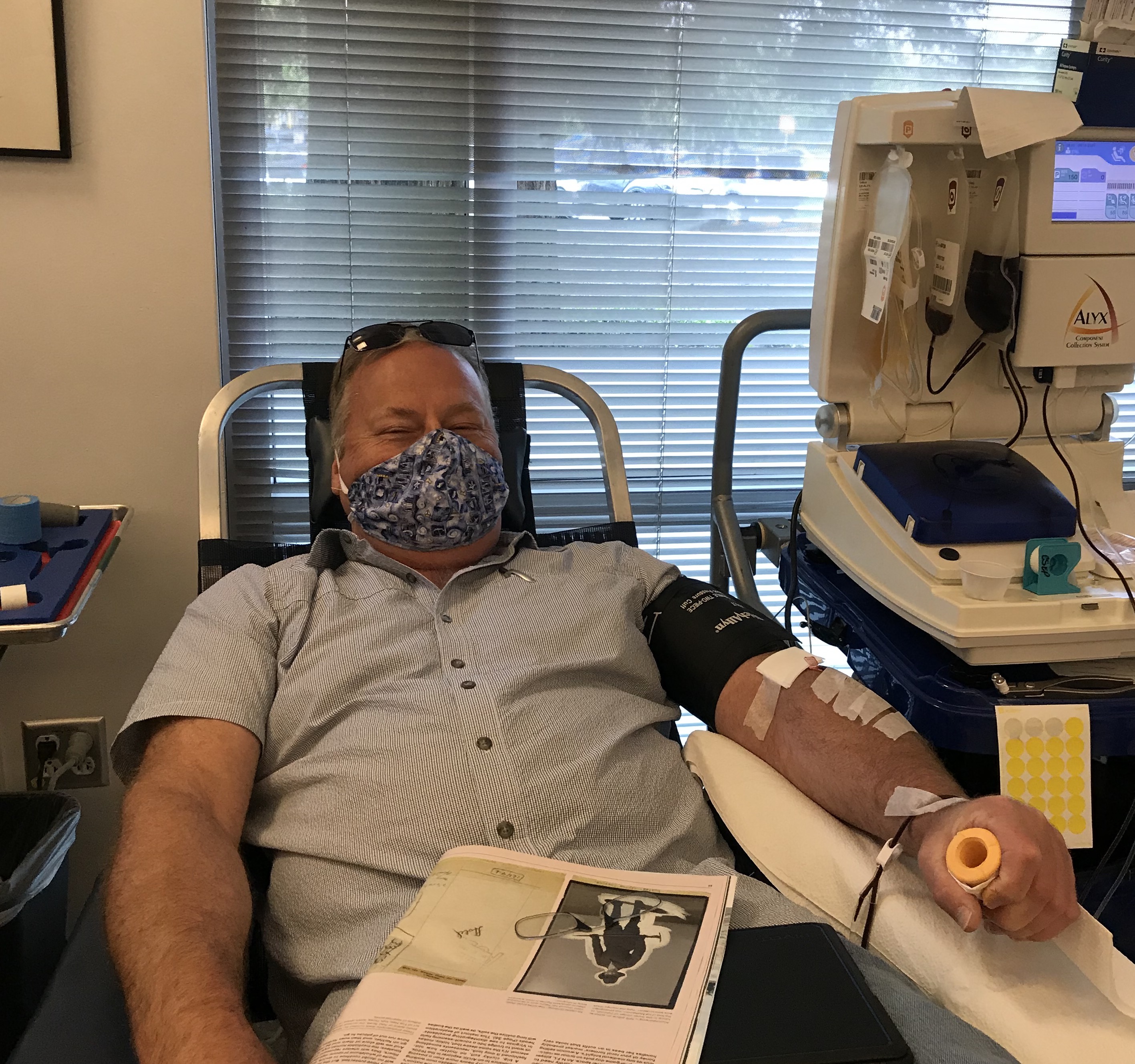 As a pilot, Robert Jendrey is always on the go. And while typically having the ability to travel around the world is considered a great luxury, when the COVID-19 pandemic was in its infancy and suspicion of global transmission was low, increased travel could prove to be dangerous.

It was in early March, before any social distancing or masking was required in the U.S., that Robert was exposed to COVID-19, he suspects when sitting next to some visibly ill individuals on a return flight. Once he was home and before he could make his next trip, he began experiencing body aches, loss of taste and smell, fatigue and a 100+ degree fever.

Though many people reported difficulty getting tested for COVID-19 in early March due to limited resources as well as the belief that the virus was relatively well contained locally, Robert was lucky enough to receive a same-day test as soon as he called his doctor. The results, which came in just one day’s time, read “COVID-19 positive.” Robert was promptly contacted by the local health department who performed contact tracing and instructed him to isolate.

The fact that Robert lived alone was initially a major concern (especially for his loved ones out of state). The exhaustion he faced over the course of the virus made it difficult at times to get up and around and to take care of his own basic needs. It wasn’t long after he was diagnosed, however, that his community came together to support him during his illness.

“At the time that I got sick, I hadn’t even met a lot of my neighbors,” Robert said, “but I had two friends in the neighborhood who have lived here for 30 years. They really know how to bring everyone together: They put out the call, and everyone answers.” Before he knew it, his friends had started a full-blown dinner campaign, and Robert was receiving regular texts from kind strangers who had left homemade meals on his porch.

“It was incredible, the way my neighbors pulled together for me,” he said. “I had really hoped that by the time I was better, the virus would have been under control and I could have thrown a party to celebrate and to feed all of them as a way to give back, but, given the current situation, I’ve had to channel their inspiration to give back in other ways, for now.”

As you might have guessed, the main way that Robert gives back as the virus continues to spread throughout the country is by donating COVID-19 convalescent plasma (CCP). “While I was sick, I spent a lot of time listening to the news. At one point, I heard a story on NPR about a doctor at Johns Hopkins whose own father had been hospitalized in San Francisco from COVID-19 but who had later benefitted from convalescent plasma. That’s when I learned about Stanford Blood Center’s program and reached out,” he said.

Eager to lend a hand as soon as possible, Robert began speaking with SBC’s Medical Director, Dr. Suchi Pandey, before he was even eligible to donate. As soon as he was able, however, he gave plasma that not only registered very high levels of antibodies, but also revealed his blood type to be AB+, one of the rarest blood types — and a universal plasma donor.

While the first donation was a smooth process, there were a few hiccups along the way during his later donations, in part due to a fairly severe fear of needles. But despite his personal reservations, Robert was determined that nothing would stop him from doing what he could to help those in need. A true testament to his deep concern for others, Robert has donated plasma a whopping four times since his recovery!

When asked what his main takeaway has been from this whole experience with COVID-19, in addition to the sense of care he has felt from his community, Robert expressed a desire to further educate the public on COVID-19-related issues. He recognizes that there is still quite a bit we do not know about COVID-19, and for this reason he is currently involved in a research study to help track the long-term effects of contracting the virus. However, in the meantime, he stressed that it’s critical we do all that we can to both prevent the spread of COVID-19 and to help those who are still facing an uphill battle with the virus. Simply put, Robert said, “More and more people are surviving, which means more and more people should be giving.”

If you have had a confirmed or even suspected case of COVID-19 and recovered, please consider donating CCP by visiting SBC’s website at stanfordbloodcenter.org/covid19plasma. And if you do not think you’ve had COVID-19, you can still make a difference in the lives of local patients by doing what Robert himself has dedicated much of his time and effort to during this pandemic: spreading the word.

“This is my way of fighting back,” Robert said. “Not just by donating, but by promoting accurate information, and by doing all I can to make sure people see and hear about convalescent plasma. It really could save lives.”