Your White Blood Cells at Work 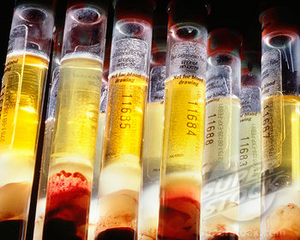 Many of us are familiar with the role of red blood cells (RBCs) in taking oxygen throughout the body via the hemoglobin molecules they have inside, and of our platelets’ ability to help prevent bleeding through creating clots. But white blood cells (WBCs), our immune system warriors, are a little more mysterious. They make up a complicated system of T-killer cells, T helper cells, antigen-presenting cells, antibody-producing cells, plus others. When a unit of un-coagulated whole blood is spun down to separate components, the white blood cells appear, creating a thin, white layer between the plasma and RBCs.

There are five basic types of WBCs that are part of our immune system – neutrophis, eosinophis, basophils, lymphocytes, and monocytes. Of these, the first three are types of granulocyte WBCs; so called because they contain little granules filled with chemicals used to destroy foreign antigens such as bacteria or pollen.

Lymphocytes are special WBCs that make antibodies to bacteria and other foreign antigens. Monocytes are perhaps the most interesting of all the WBCs. They undergo a strange transformation as they squeeze through blood vessel walls into the surrounding tissues to attack foreign bacteria. The monocytes turn into macrophages (cells whose name means “big eater”) that can grow finger-like extensions called “filopedia”. They reach for any bacteria with those fingers, bring them in closer, then eat them. They break them down with enzymes and eat their little bacteria bodies before the bacteria eat you.

Here is an electron microscope picture of one of these hungry macrophages and some E. coli bacteria.

These are your WBCs at work. It’s a good thing they’re all there to protect you and keep you safe.